The Ferrari 296 GTB is just the second plug-in hybrid in the brand's 82-year history, joining the SF90 Stradale and signaling the supercar maker's increased use of electrification in its range.

Ferrari and its supercar competitors are beginning the transition to electrification, with smaller engines coupled to electric motors that produce equal or better performance than gasoline engines alone.

Ferrari’s latest answer to the challenge is the 296 GTB, its first plug-in hybrid powered by a V-6 engine.

That mid-rear, 654-hp, 2.9-liter turbocharged gasoline powerplant is coupled with a 122-kilowatt (166-hp) electric motor, offering a combined output of 819 hp, putting "at the top of the rear-wheel-drive sports car segment," Ferrari said.

In addition, Ferrari says the gasoline engine’s output of 218 hp per liter is a record for a production road car.

What’s in a name? 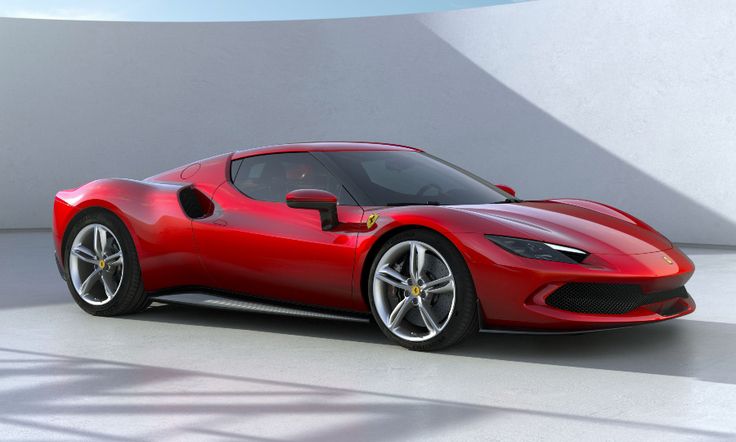 The Ferrari 296 GTB's name breaks down like this: The first two digits are the supercar’s engine displacement, 2.9 liters, and the 6 is for the number of cylinders. GTB is short for Gran Turismo Berlinetta.

The 296 GTB is just the second plug-in hybrid in the brand's 82-year history, joining the SF90 Stradale and signaling Ferrari's increased use of electrification in its range.

The 296 GTB has one e-motor, which offers maximum torque of 315 newton meters (232 pounds-feet), that is located between its gasoline engine and transmission (the so-called P2 configuration).

This dual-rotor, single-stator axial flux motor’s compact size allowed Ferrari to reduce the length of the supercar’s powertrain. As a result, the 296 GTB’s wheelbase is 2600 mm, compared with 2650 mm on the V-8-powered SF90 Stradale. A shorter wheelbase provides a tighter turning radius and improved maneuverability.

The SF90 Stradale also has three e-motors, one at the rear and one for each of the front wheels, thus achieving four-wheel drive capability. The 296 GTB is rear-wheel-drive only.

The 296 GTB’s e-motor charges the car’s 7.45-kilowatt-hour high-voltage battery. The e-motor also turns on the engine, supplies it with additional torque and power and helps the car achieve an electric-only range of up to 25 km (16 miles).

The battery pack is located under the floor. To minimize volume and weight of the cooling system, structure and fixing points are integrated into a single component. The battery modules contain 80 cells that are connected in series. Each cell supervisor controller is installed directly in the modules to reduce volume and weight.

The inverter is based on two silicon modules connected in parallel. Ferrari says the inverter converts the electric energy with a high level of efficiency (more than 94 percent).

The e-motor is separated by a dual clutch from the eight-speed transmission, which is already used by multiple Ferrari models, including the SF90 Stradale, SF90 Spider, Roma and Portofino M.

Unlike the SF90 Stradale, which uses one of its three e- motors to move backward, the 296 GTB has a mechanical reverse gear.

Potential competitors for the 296 GTB include the Maserati MC20, which produces 630 hp from a 3.0-liter V-6, or 210 hp per liter (a full-electric variant will be unveiled next year); the McLaren Artura, a new V-6 plug-in hybrid model with 671 hp; and the Lamborghini Huracan, which has a conventional powertrain, although Lamborghini is planning to introduce a lineup of plug-in hybrids ahead of future full-electrification.

European deliveries of 296 GTB started in the first quarter at a base price of 269,000 euros in Italy.