Renault describes the Morphoz as a crossover "with tight yet sensual lines, and a design that blends the attributes of a sedan, an SUV and a coupe."

PARIS — Renault is offering a vision of versatile electric mobility in the years after 2025 with its Morphoz concept, a family-sized crossover vehicle that can expand in the front to accept a larger battery pack for longer trips and in the rear to increase cargo and passenger space.

The Morphoz is based on the Renault-Nissan alliance’s CMF-EV electric vehicle platform, which will be used for on alliance vehicles beginning in 2021. Renault says elements from the Morphoz’s design, details and interior will be carried over to the next generation of its electric vehicles.

The Morphoz was meant to be shown at the Geneva auto show, along with a number of new electrified models in Renault Group’s range, including the Renault Twingo Z.E. battery-powered car, and the Renault Captur and Megane plug-in hybrids, and the Clio conventional hybrid. Dacia was also going to show its first electric vehicle.

The CMF-EV platform is designed around a flat battery pack and wheels that are pushed out to all four corners to maximize interior space. Renault executives say it increases interior room by a full segment — for example, a vehicle built on the platform could have the exterior dimensions of a compact car but the interior volume of a midsize one.

Renault says the Morphoz is meant to showcase the modular capacity of the CMF-EV platform, which can accept different sizes of battery depending on the intended use. The Morphoz is part of an electric “ecosystem,” based on a platform that allows for wireless induction charging, transfer of extra electric power to the owner’s home, and storage of larger battery packs for long-distance travel. 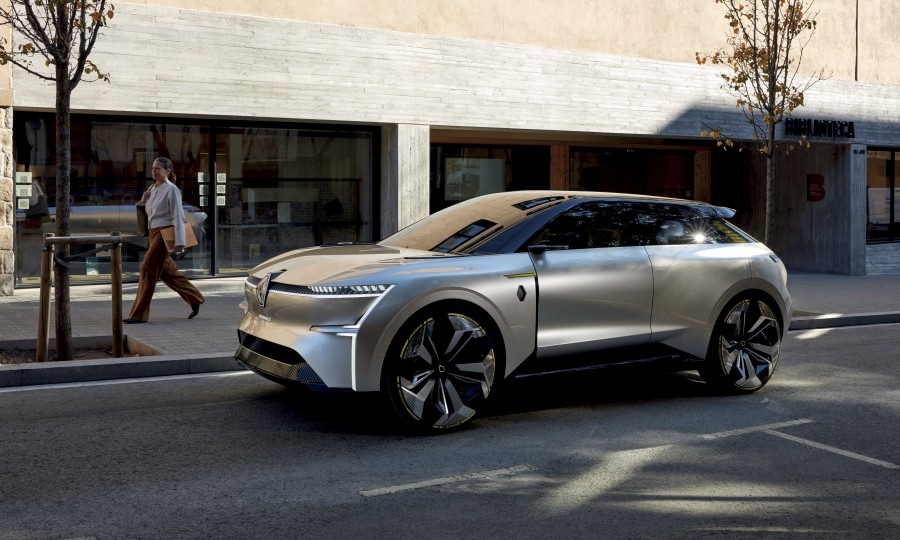 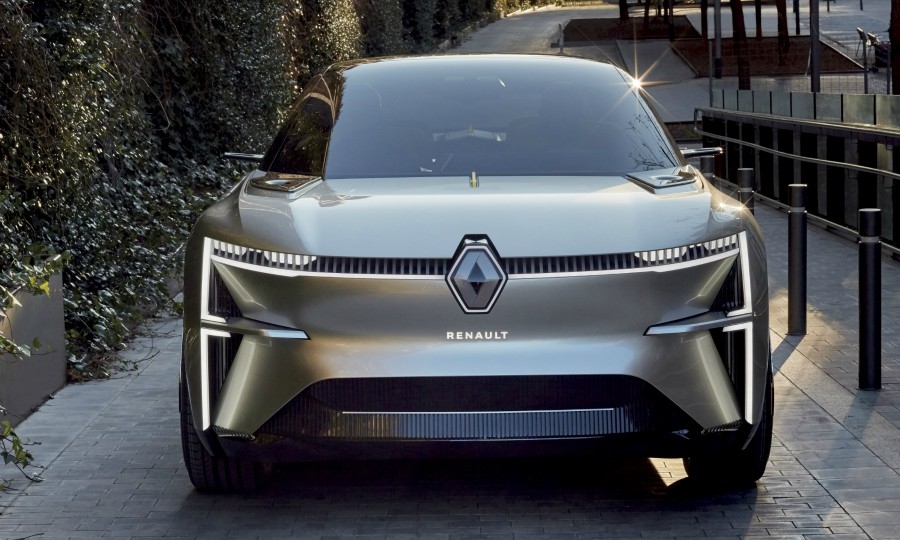 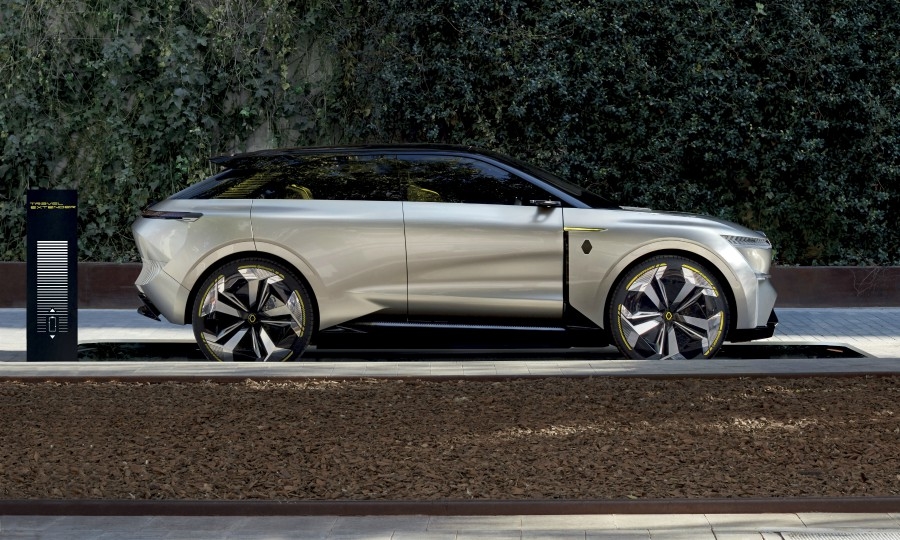 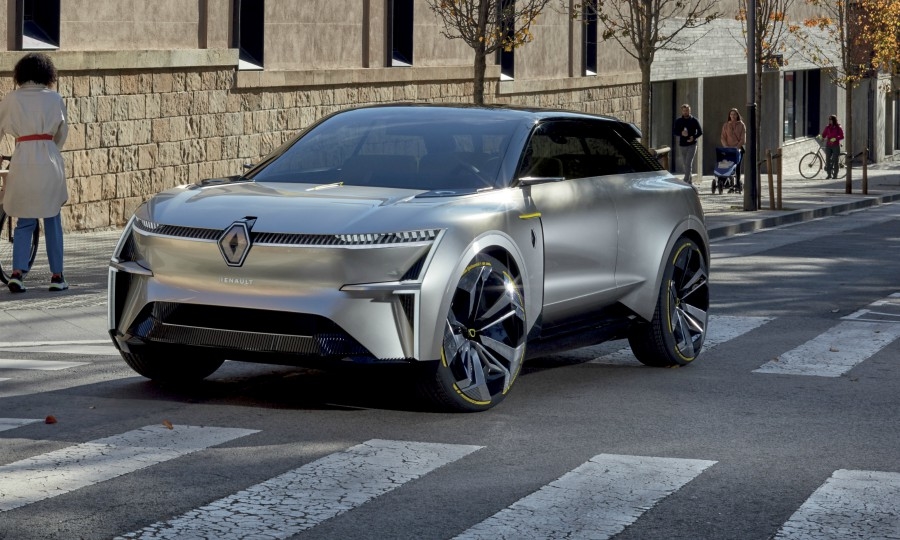 The CMF-EV platform debuted on the Renault Morphoz concept car (shown) and will be used to underpin the next generation of Renault-Nissan's electric models. 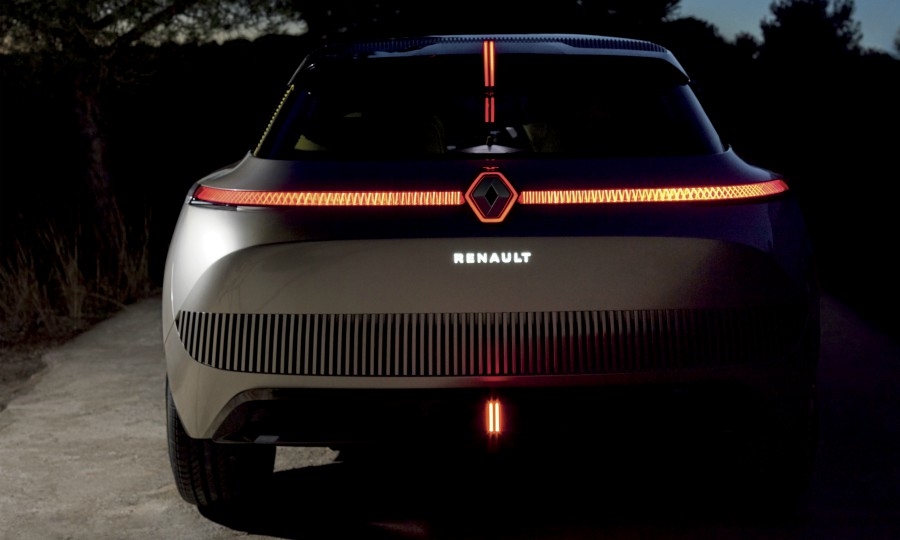 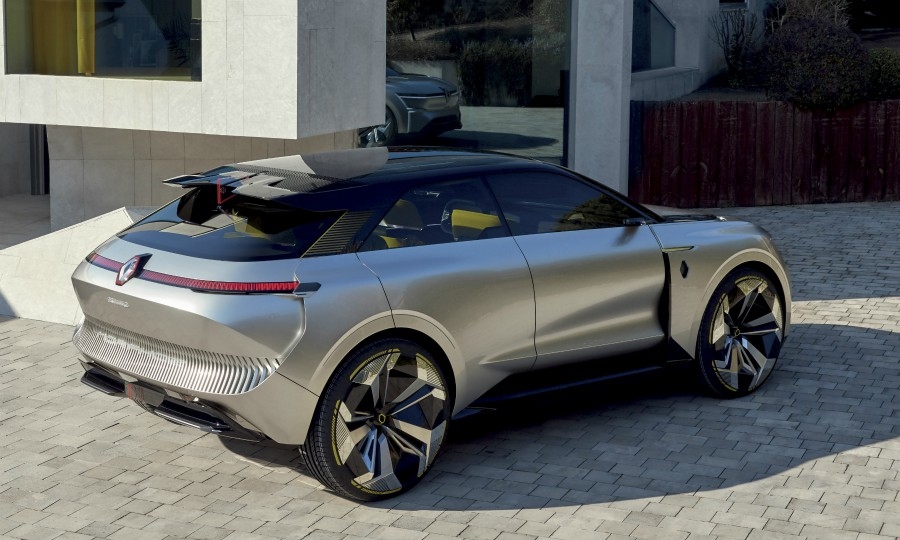 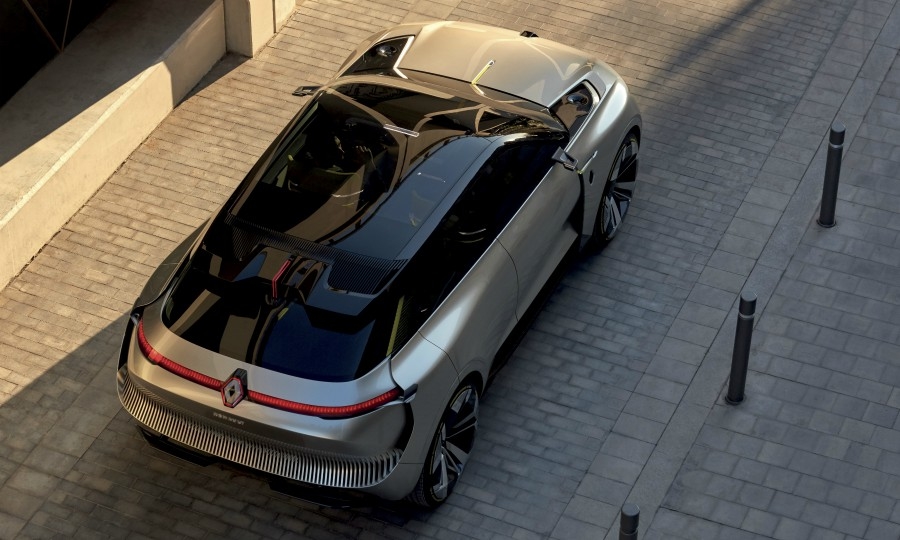 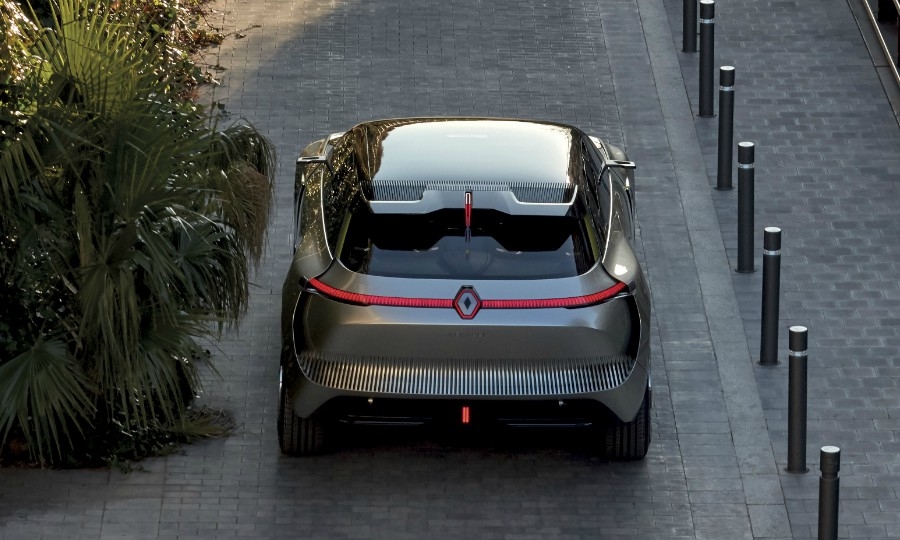 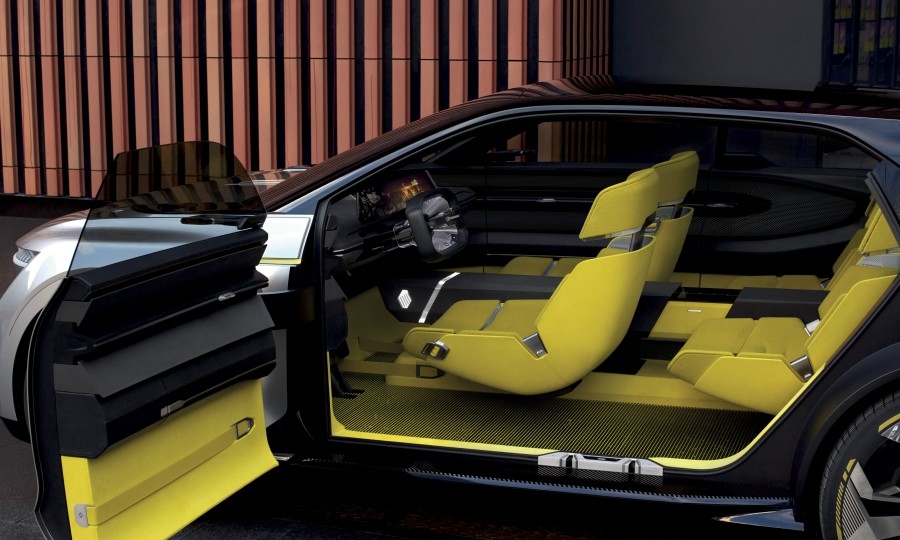 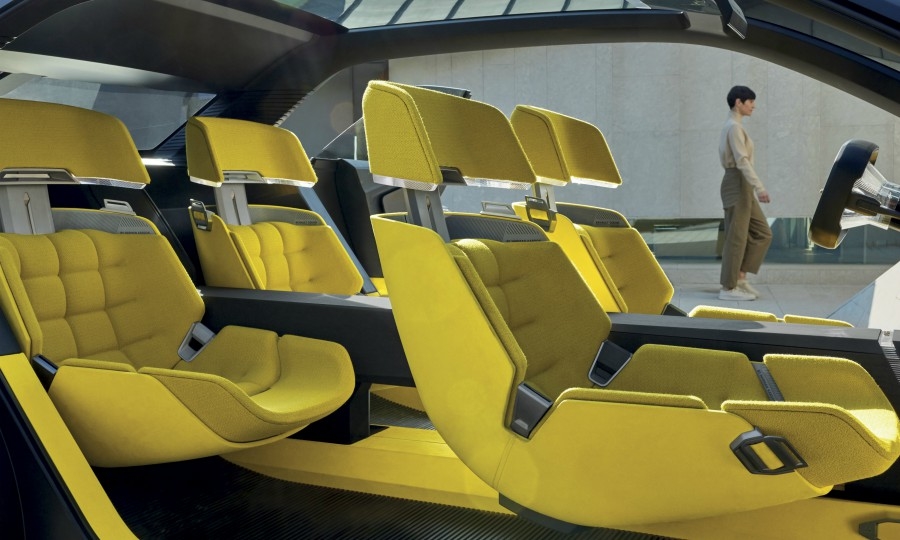 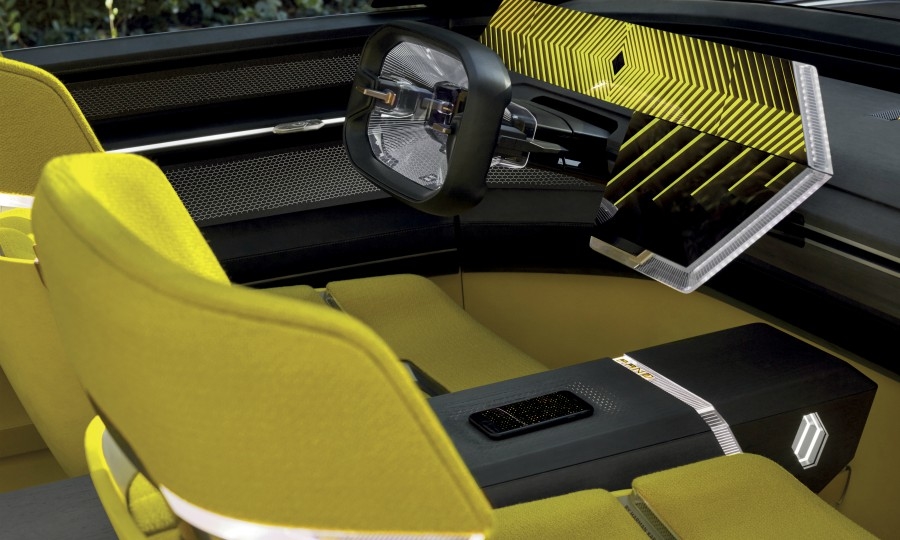 The Morphoz is 4400mm long in “city” mode, with a 2730mm wheelbase and a 40 kilowatt-hour battery offering 400 km (249 miles) of range, meant to keep a compact footprint for parking, light weight and lower battery costs. Renault says this mode would be used for 90 percent of trips.

For a longer journey, the Morphoz becomes 4800mm long, with a 2930mm wheelbase. The front clip automatically extends to accommodate an extra 50 kilowatt-hour battery, for a total range of 700 km in highway use. The rear end also expands to give more leg room and luggage space, and the rear seats move backward.

Lauren van den Acker, Renault's design chief, said the Morphoz signals the evolution of crossover and SUV designs as electric vehicles. SUVs, which are increasingly popular with buyers, are relatively aerodynamically inefficient — which hurts range, whether internal combustion or electric —  because of their height and larger cross-sections.

Renault describes the Morphoz as a crossover “with tight yet sensual lines, and a design that blends the attributes of a sedan, an SUV and a coupe.” It is 2000mm wide and 1550mm high. In comparison, the Renault Koleos midsize SUV is 4673mm long and 1678mm high.

The Morphoz has a protruding rear end designed to reduce overhang and make parking in town easier.

Renault says it is using artificial intelligence — via 5G connectivity — to enhance the experience of passengers in the Morphoz. Sensors detect and recognize the driver and passengers as they approach the vehicle, and the seats and climate controls are automatically adjusted to their preferences.

Once inside, the driver’s cell phone becomes the main data source for the Morphoz’s artificial intelligence. For example, it can read a daily calendar of appointments and create an optimal travel route, visualized on the central screen. On vacation, the screen could show points of interest along the route.