The Prius has new drivetrains with significantly more power.

TOKYO – Toyota is flipping the script for the next-generation Prius hybrid.

The fuel-sipping nameplate, a byword for eco-friendly driving since its 1997 debut, will not be a whole lot greener with the redesigned fifth generation. But it will sure be a whole lot meaner.

On tap is a new range of more powerful drivetrains with significantly more oomph and a zero to 100 kph (62 mph) sprint time as quick as 6.7 seconds. Total output, for the plug-in at least, should top 200 hp.

What is more, it's all wrapped in head-turning, sports-car-inspired sheet metal that rides on a new platform that is lower and wider for spunkier handling. The Prius family's familiar and polarizing wedge shape has actually morphed into something sexy.

Toyota executives unveiled the radical redesign here Wednesday with a bold Prius promise: a ton more power and pleasure but with all the same miserly fuel economy.

Toyota Chairman Takeshi Uchiyamada, the so-called Father of the Prius who stunned the auto world by developing the first-generation hybrid, says the Prius is no longer a compromise car.

"We wanted to show we could maintain the efficiency and see a jump in performance," Uchiyamada told Automotive News. "We do not have to have a trade-off. We can do both."

Total horsepower jumps as much as 77 percent in the plug-in variant and up to 60 percent in the standard hybrid. That surge comes thanks to the introduction of Toyota's fifth-generation hybrid system, which gets a bigger engine, new battery and tweaked electric motor.

While Toyota did not offer fuel economy figures, it said overall miles per gallon will stay roughly the same. The plug-in's EV-only driving range, though, leaps by up to 50 percent.

The specifications released in Japan pertain to the global-market version, The redesigned Prius makes its U.S. debut Wednesday at the Los Angeles auto show.

Uchiyamada introduced the first-generation Prius under the slogan "Just in time for the 21st century." Today, a quarter-century later, the new catchphrase is "Hybrid Reborn."

Engineers and executives jostled over how to keep the Prius relevant in the electric vehicle age. Toyota's trademark hybrid technology bolts an internal combustion engine onto an electric motor and battery setup — a revolutionary breakthrough when it debuted 25 years ago.

These days, as EV startups such as Tesla flood the market and rival old-school metal benders — from General Motors to Volkswagen — race to dump fuel-burning mechanics for zero-emission, battery-electric systems, hybrids may seem to hark back to an earlier era.

At Toyota, some felt the Prius had accomplished its mission in popularizing hybrid drivetrains.

Toyota President Akio Toyoda proposed repositioning the Prius as a "commodity" car — an inexpensive fleet vehicle or a car for the masses. Maybe even a taxi. It would leverage the dramatic cost reductions Toyota has achieved in hybrid technologies and reach new highs in volume.

But engineers pushed back.

They wanted to keep the Prius aspirational and pioneering, something that lived up to its name, a moniker derived from a Latin word meaning "to go before."

The R&D team, led by Chief Engineer Yasushi Ueda and Development Head Satoki Oya — neither of whom had worked on the Prius before — proposed dialing up performance and emotion.

They would not sacrifice the Prius' environmental cred.

But they wanted to quash years of criticism that the Prius was a frumpy and boring go-to car for the granola-crunching, Birkenstock crowd.

Customer feedback had been panning the Prius' hyper-efficient, thrashy "CVT feel," said Masahiko Maeda, Toyota's chief technology officer and president of its vehicle development center. The phenomenon mimics that of a continuously variable transmission, where drivers step on the gas but do not experience a corresponding kick of acceleration.

"We wanted much better driving performance," Maeda told Automotive News in a separate interview. "Especially in the U.S., people say they like cars with better acceleration."

The debate continued from 2018 until January 2021, when President Toyoda finally gave the greenlight to go emotional. But even then, he was not completely convinced.

"AT [Akio Toyoda] said he looks forward to seeing who was right, and that will be determined by the car's actual sales," said one person familiar with the planning discussions.

Maeda said the shift to more powerful drivetrains with peppy performance will capture a new segment of customers. That will further the market penetration of Toyota's hybrid technology, with the added benefit of further reducing carbon emissions as more customers shift to hybrids.

"This is an expansion of the range to popularize the technology," he said.

The fifth-generation Prius enters production at the company's Tsutsumi assembly plant in Toyota City in December. That is where the outgoing version is built. Sales will kick off in Japan in January. Then, the redesigned Prius will roll out to the U.S. and Europe from early next year.

The flagship hybrid will not be sold in China, where Toyota ended Prius sales in 2016.

Here are the nuts and bolts of what is on tap.

The traditional Prius and plug-in version will both get a 2.0-liter engine mated to a new fourth-generation lithium ion battery. That is a step up from the outgoing model, which has only a 1.8-liter engine and also options an older-generation, nickel-metal hydride battery on some grades.

A lower grade of the upcoming Prius will keep a 1.8-liter option as an entry-level model.

But the U.S. will get only the 2.0-liter variants.

The standard 2.0-liter hybrid system was first deployed in the Corolla Cross Hybrid for Europe. In the Prius, it will be the first time Toyota has paired a 2.0-liter engine with a plug-in.

In the old Prius, both the regular and plug-in powertrains churn out 90 kilowatts (roughly 121 hp) of combined system power between the engine and electric motor.

Toyota says the PHEV's EV-mode range will increase up to 50 percent over the outgoing version, depending on specifications such as wheel size.

Engineers repackaged the plug-in's battery. It used to be under the rear cargo area. Now, it's under the seats, delivering more space in the back to haul things.

Another difference will be how Toyota distinguishes the standard and plug-in offerings.

In the previous generation, the plug-in Prius Prime got dramatic styling flourishes to set it apart from its pedestrian stablemate, including a flowing, wave-like rear deck and taillight motif.

The redesign barely distinguishes the two versions at all, save for some metal trim treatment.

Toyota calls it the "One Prius" approach. 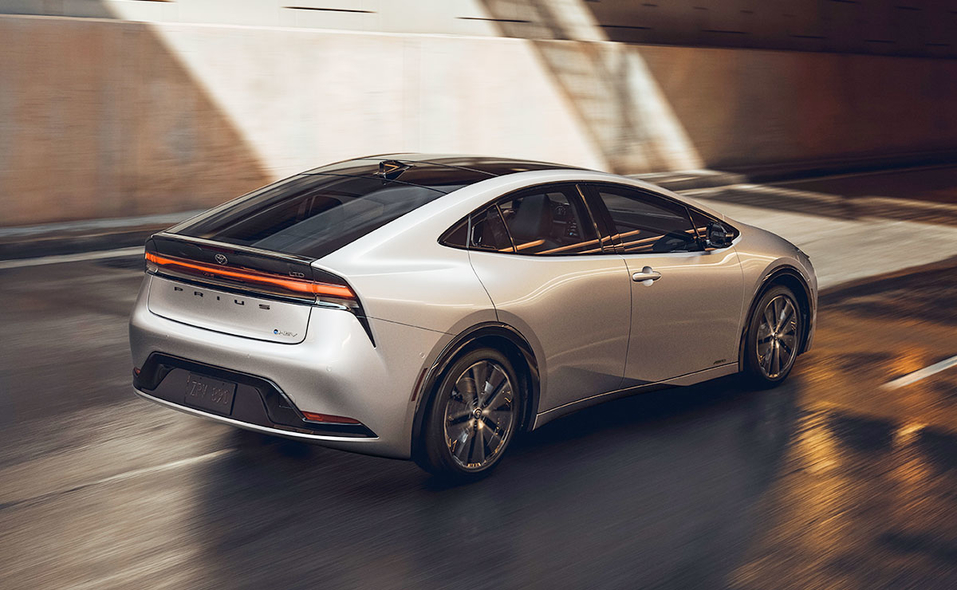 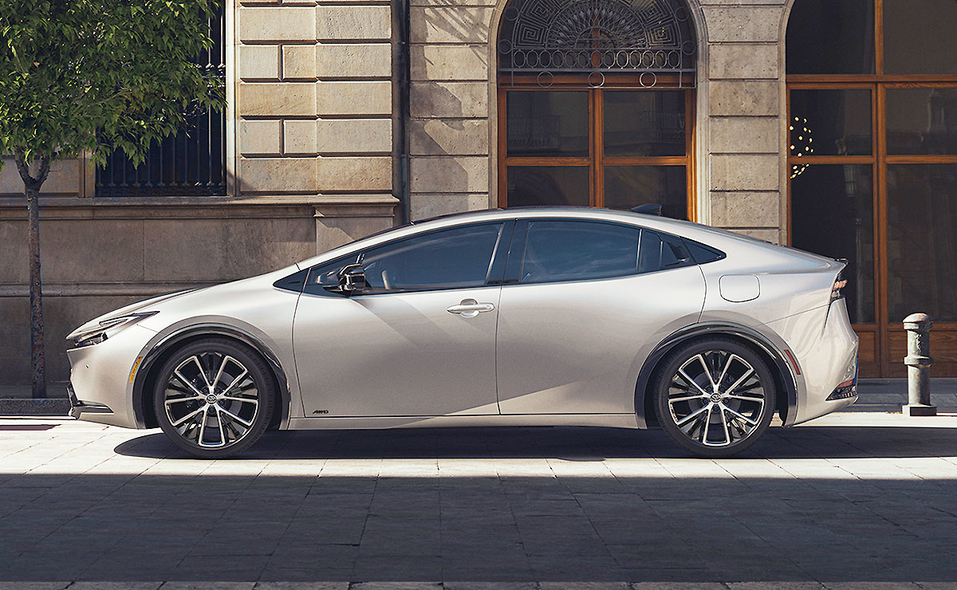 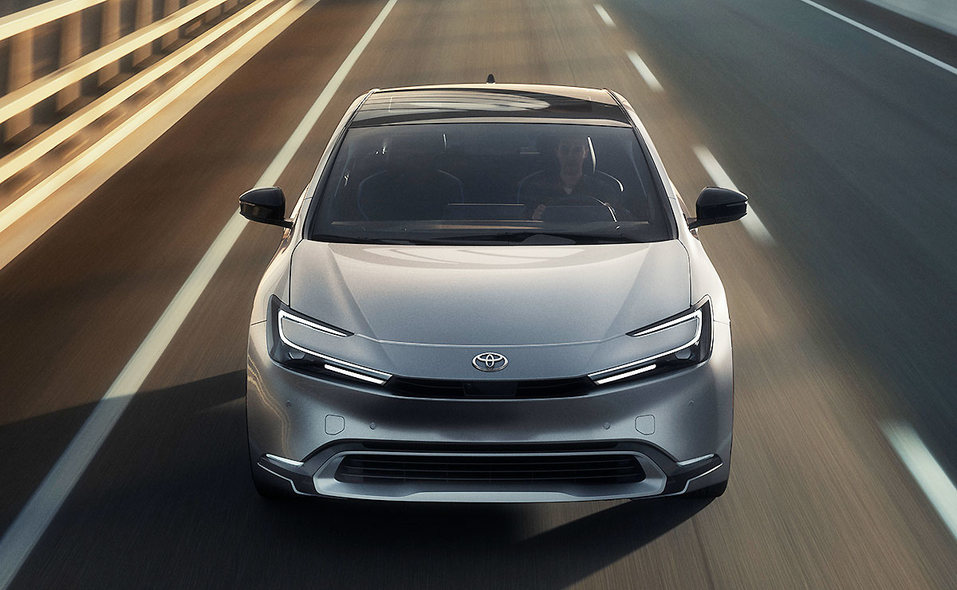 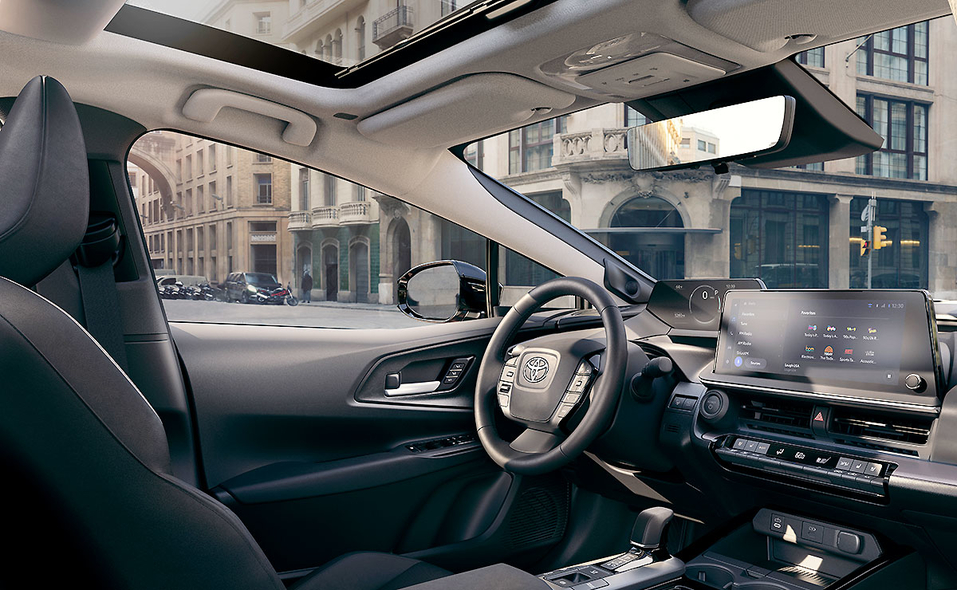 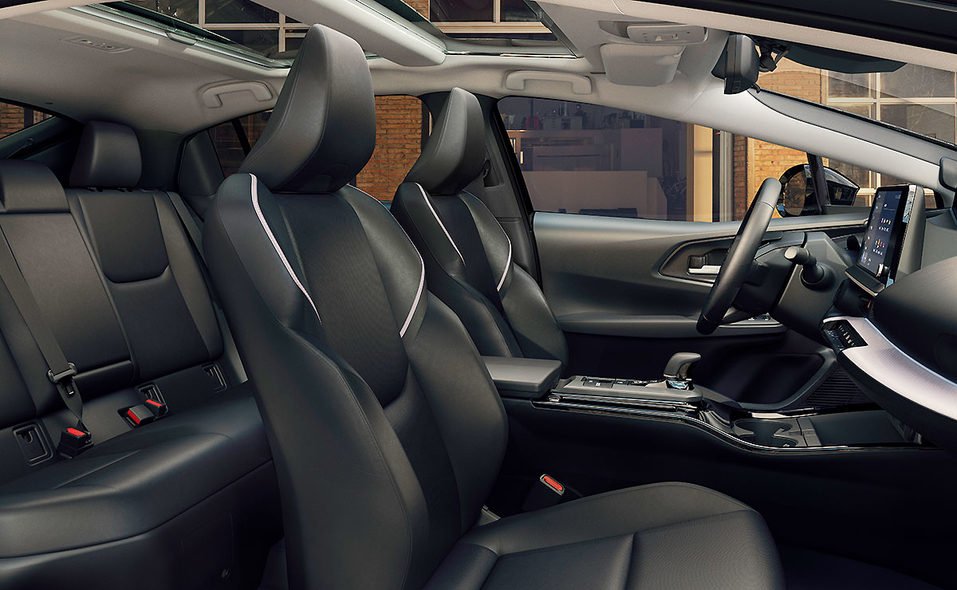 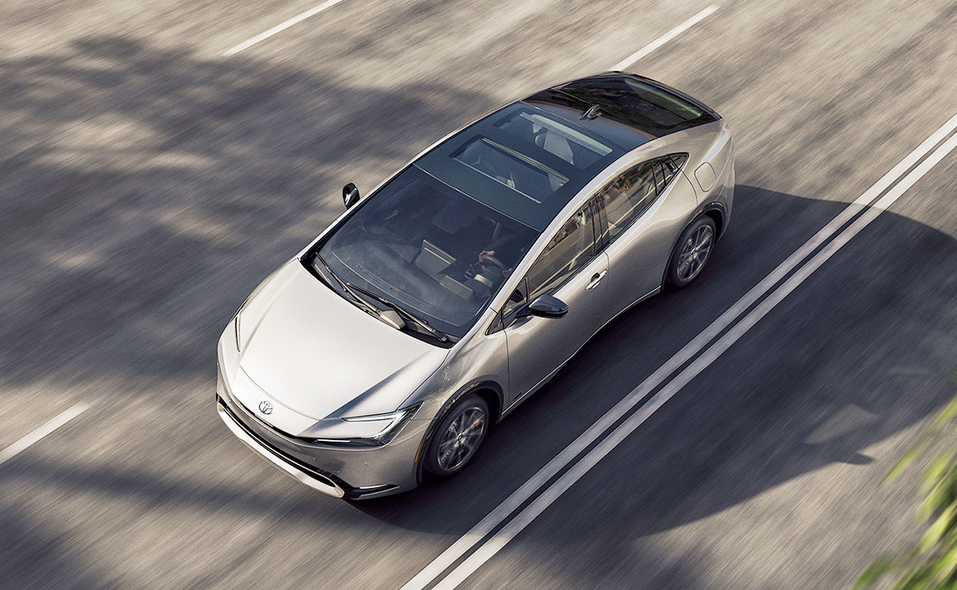 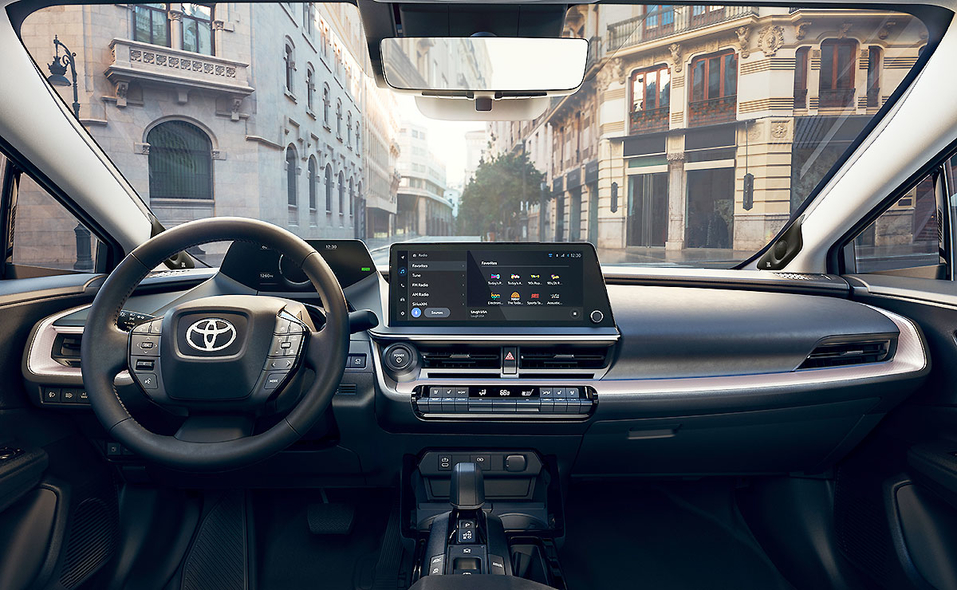 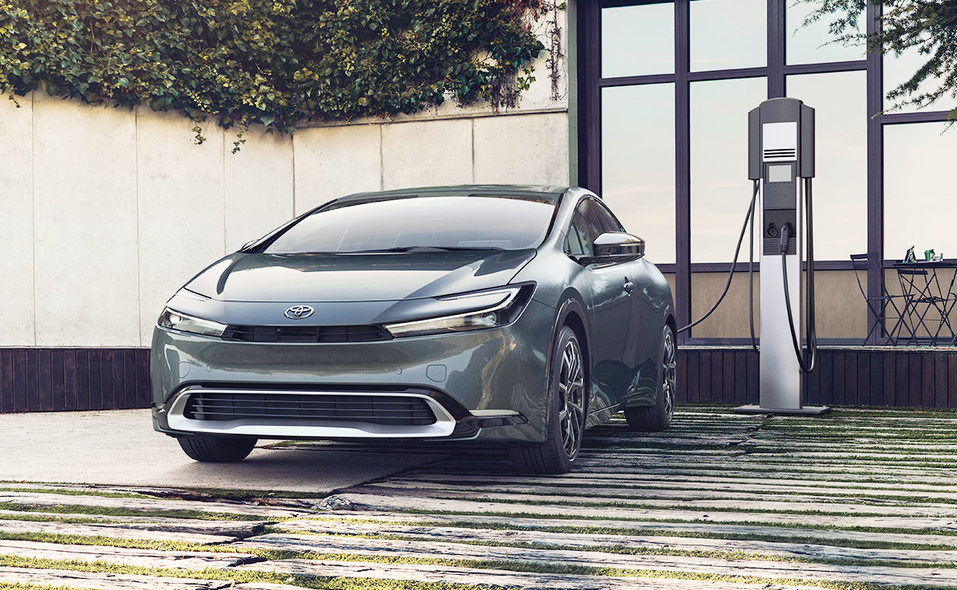 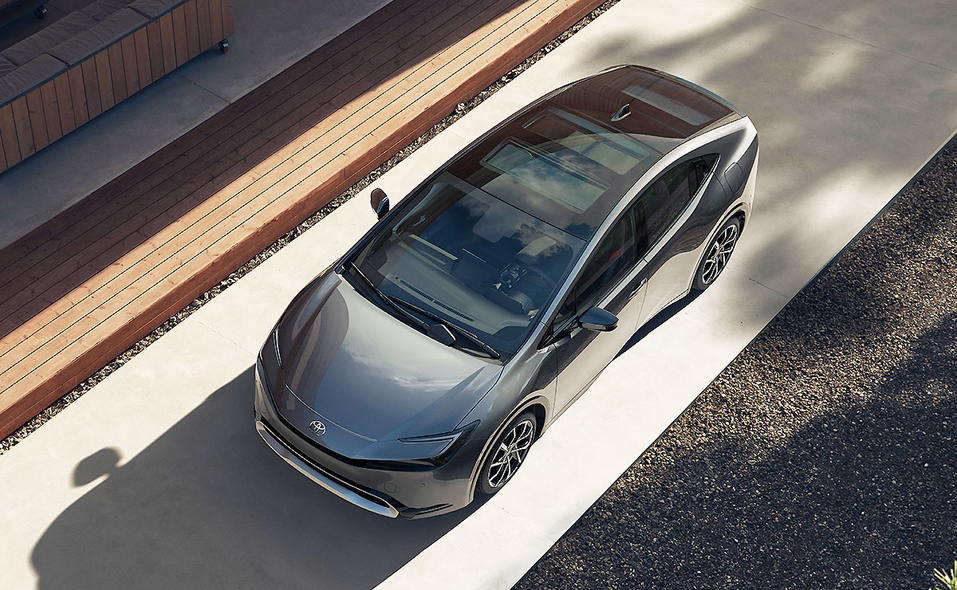 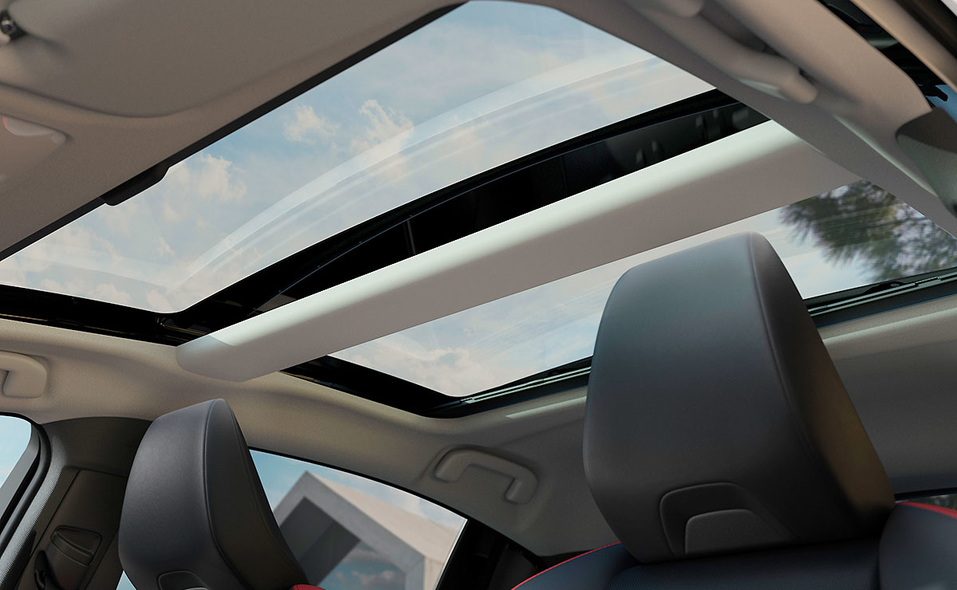 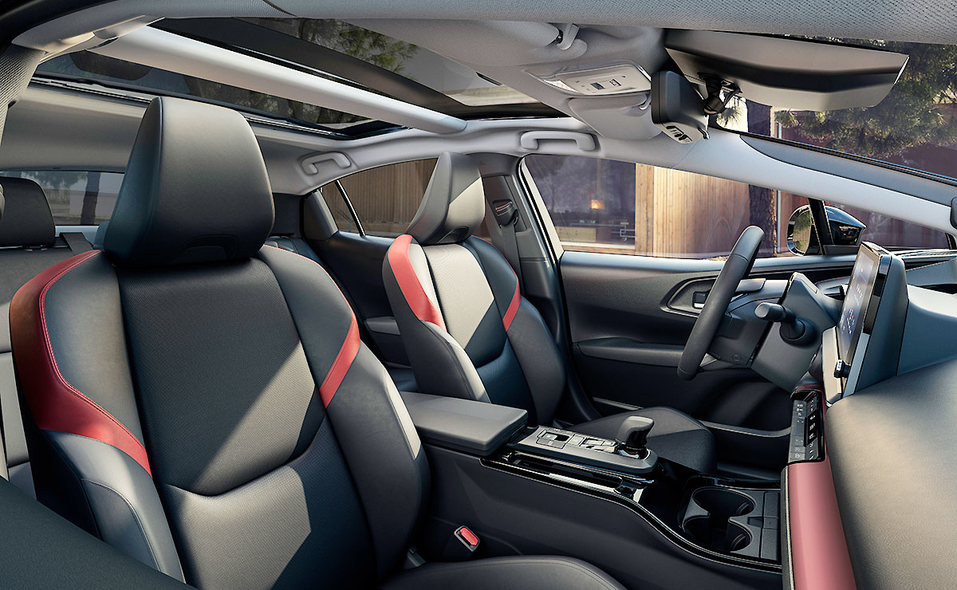 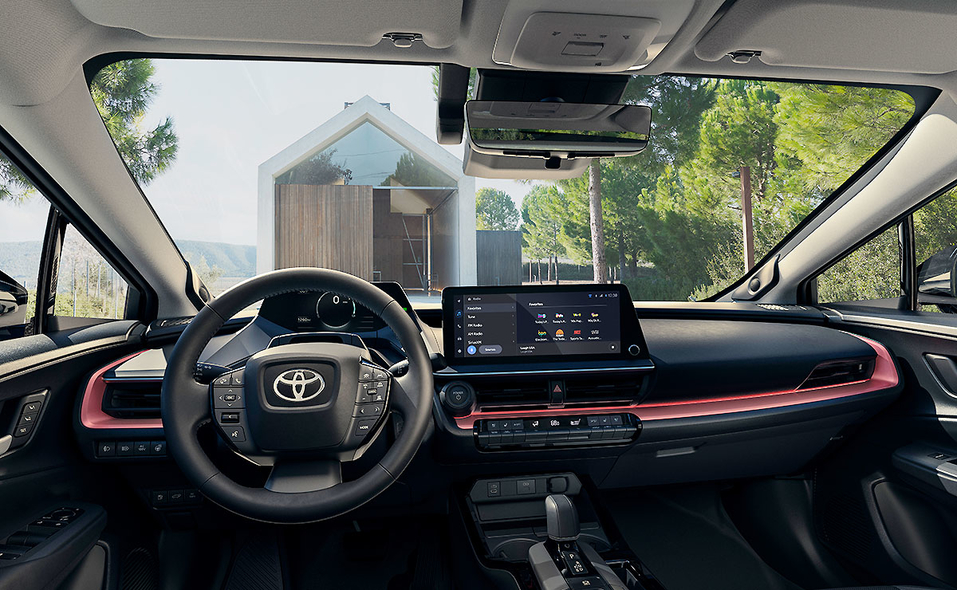 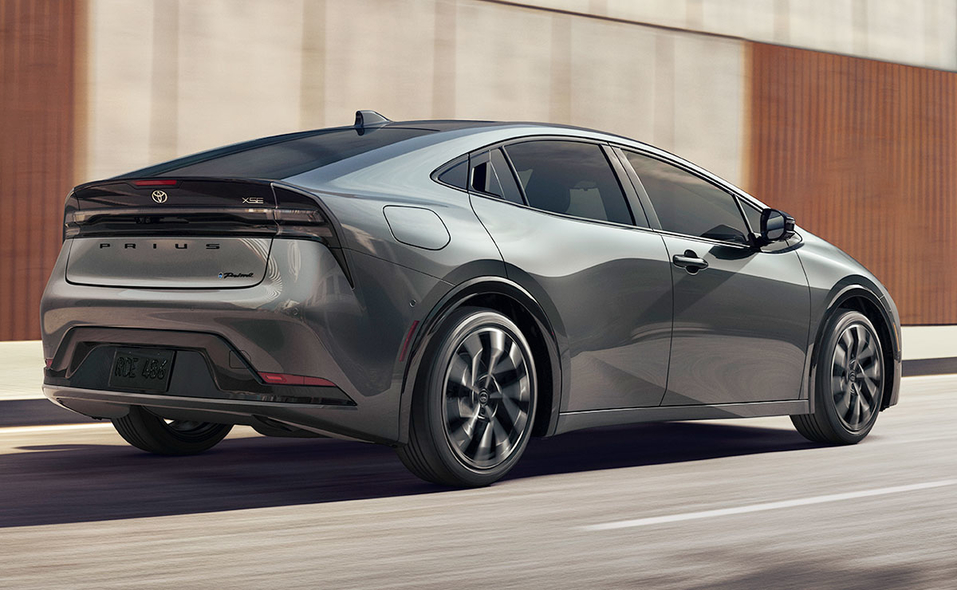 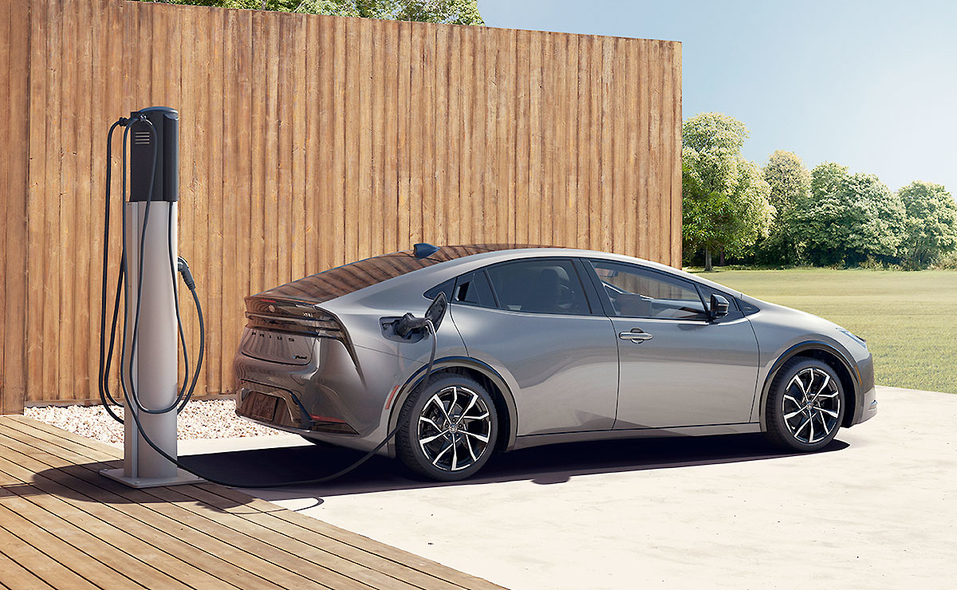 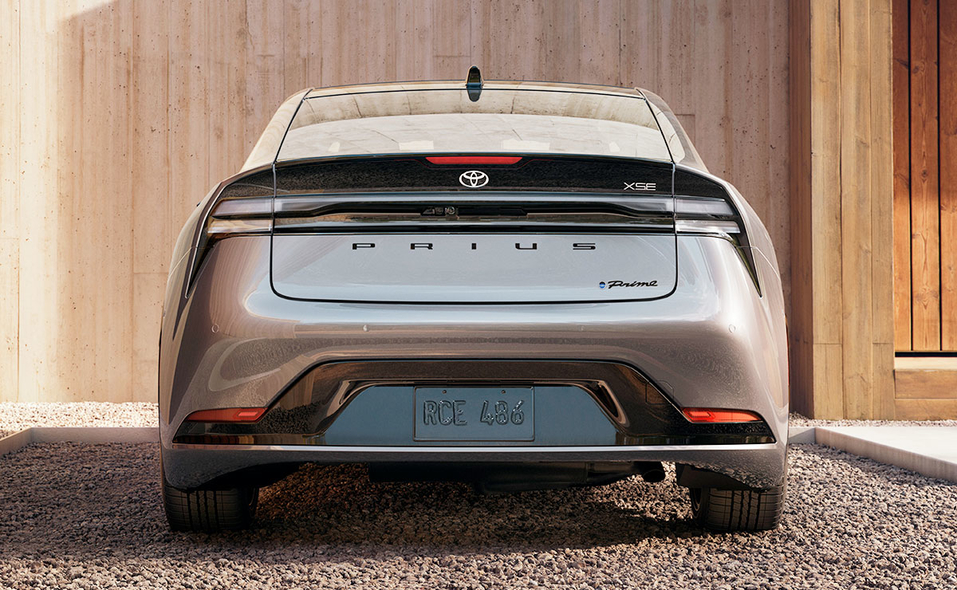 The updated styling starts with a more handsome front face that employs the new hammerhead language seen in the bZ4X all-electric crossover.

The car keeps its hatchback configuration. But it is lower and wider than the current model and just a tad bit longer with a longer wheelbase. The cabin's roof peak is also pulled back for a sportier, rear-slung look.

The body design is clean and technical looking for a futuristic vibe. Creasing along the side and bulging rear fenders add a muscular aura that amplifies the car's performance pitch.

The rear door handle is hidden in the window frame, a trick pulled from Toyota's C-HR.

Around the back, Toyota ditches the love-it-or-leave-it zig-zag taillights for a minimalist light bar that stretches across behind and dips into the rear fender with a neat corner crease.

Toyota hypes the Prius brand by spelling out the name in bold letters across the tailgate.

The Prius also gets bigger wheels, 17- and 19-inchers, to beef up its stance.

Toyota once had high hopes for the Prius. It built an entire subbrand around the name — including the Prius V wagon, the Prius Prime plug-in and the subcompact Prius C.

At one point, Toyota even planned to build the car at its then-new assembly plant in Blue Springs, Mississippi. That would have supplemented output from the Tsutsumi mother factory in Japan.

But the Prius family has withered away. Only the standard hatchback and plug-in are still on sale in the U.S. And the Blue Springs factory, which opened in 2011, is making Corollas instead.

With nearly every major Toyota nameplate offering some kind of electrified version — including the Corolla — there are fewer reasons for customers to pick the Prius.

"In the past, because of the environmentally friendly image of the Prius, we always pursued fuel efficiency above all else," Uchiyamada said. "But nowadays, almost every Toyota model has some kind of hybrid, so it's not that the Prius stands out in terms of fuel efficiency."

Toyota sees the radical revamp in performance as one way the Prius can live up to its name of pioneering new ground by taking pole position as something performance oriented.

"We do not have to sacrifice anything. The motor will enable powerful driving performance," Uchiyamada said. "That is why we decided to pursue this strategy."