The Artura is instantly recognizable as a McLaren with styling cues such as thin headlights and taillights, sculpted panels for aerodynamics and dihedral doors.

The McLaren Artura, a key model as the British marque transitions to a 100 percent electrified portfolio by 2026, will not only continue the brand's pedigree with extreme performance, it also provides the automaker with an opportunity to become a leader as exotic and ultraluxury brands embrace electrification.

While the Artura, a plug-in hybrid, is not McLaren Automotive's first foray into hybrid vehicles -- both the P1 and Speedtail hypercars were hybrids -- it does represent a handful of firsts for the brand.

The plug-in hybrid is the first model on the company's carbon lightweight architecture, the first McLaren to feature a V-6 engine and the first model to offer a batch of advanced driver-assistance system features, as the automaker puts a significant emphasis on Artura's technology and everyday livability.

The Artura, revealed online Tuesday, was originally scheduled to go on sale in October, but the launch was delayed by the COVID-19 pandemic.

"It's a very efficient powertrain, but it's very much an integrated powertrain of engine, electric motor, transmission as one unit," McLaren CEO Mike Flewitt told Automotive News in December. "It's all about efficiency."

A battery pack with five lithium ion modules powers the motor. The pack has a 7.4 kilowatt-hour capacity.

McLaren says the Artura has a range of 19 miles (31 km) when driven in its E-mode of pure EV driving. It can reach 80 percent charge level in two and a half hours with a standard EVSE cable.

Three drive modes beyond E-mode are available and dictate Artura's driving experience. In comfort mode, the internal combustion engine shuts off under 25 mph, while in sport and track modes, electric power is utilized for low-end response and acceleration, McLaren said.

One of McLaren's objectives for the Artura was the vehicle's throttle-response, said Jamie Corstorphine, McLaren's director of product strategy. 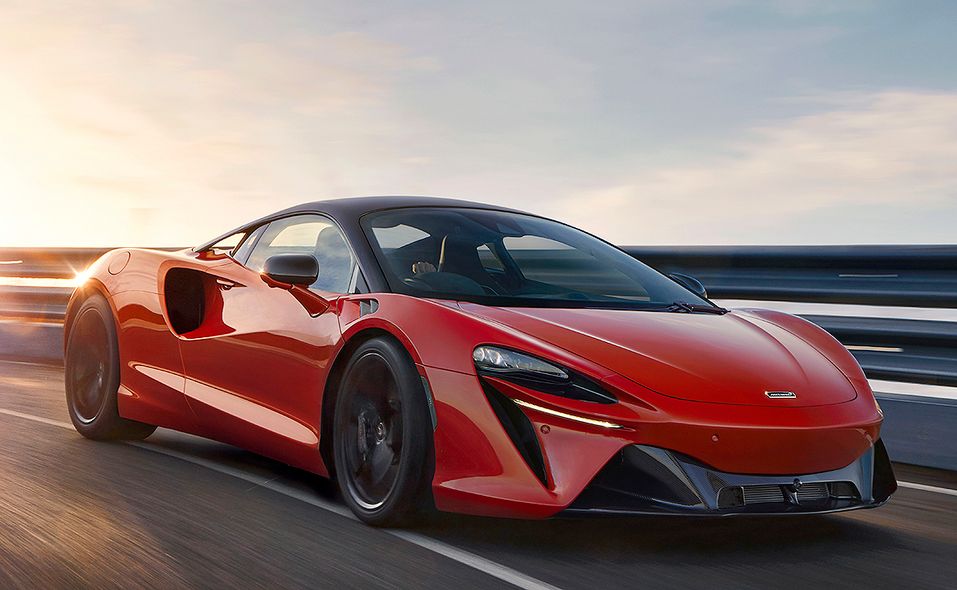 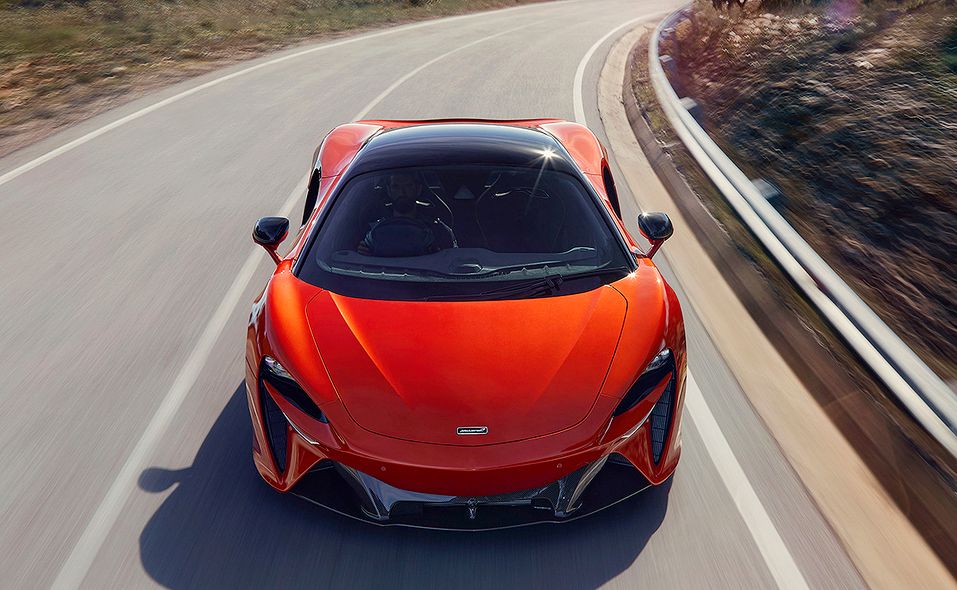 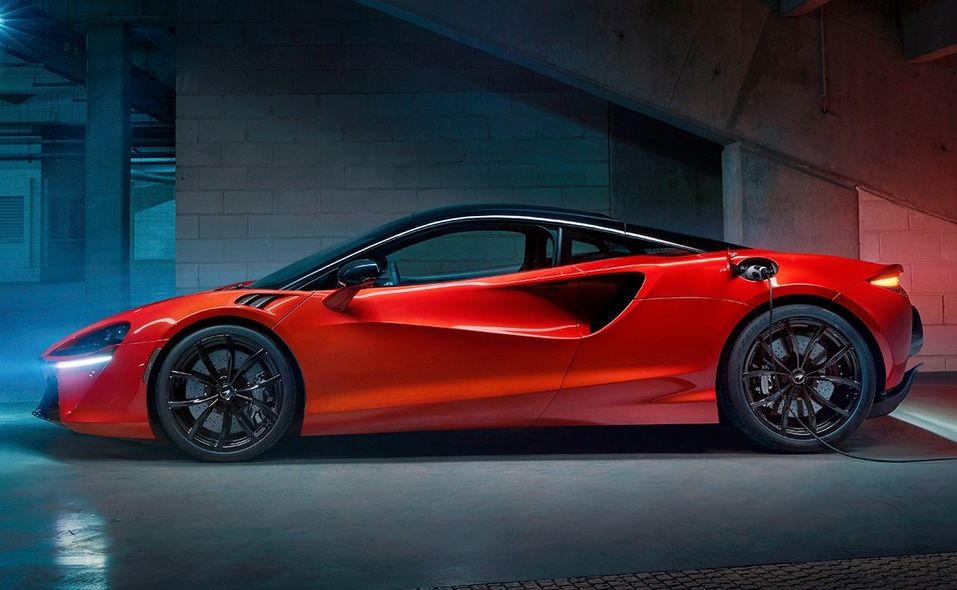 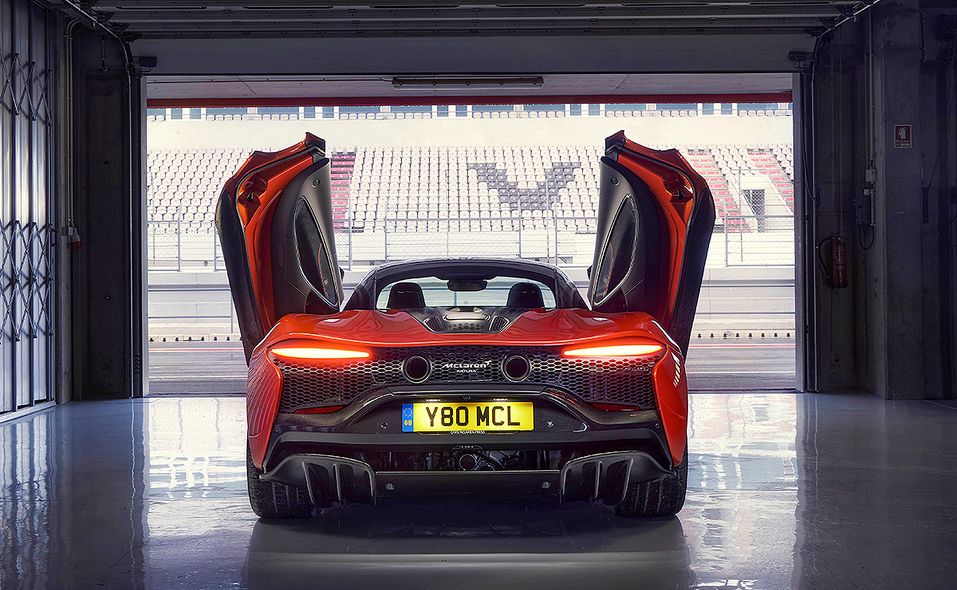 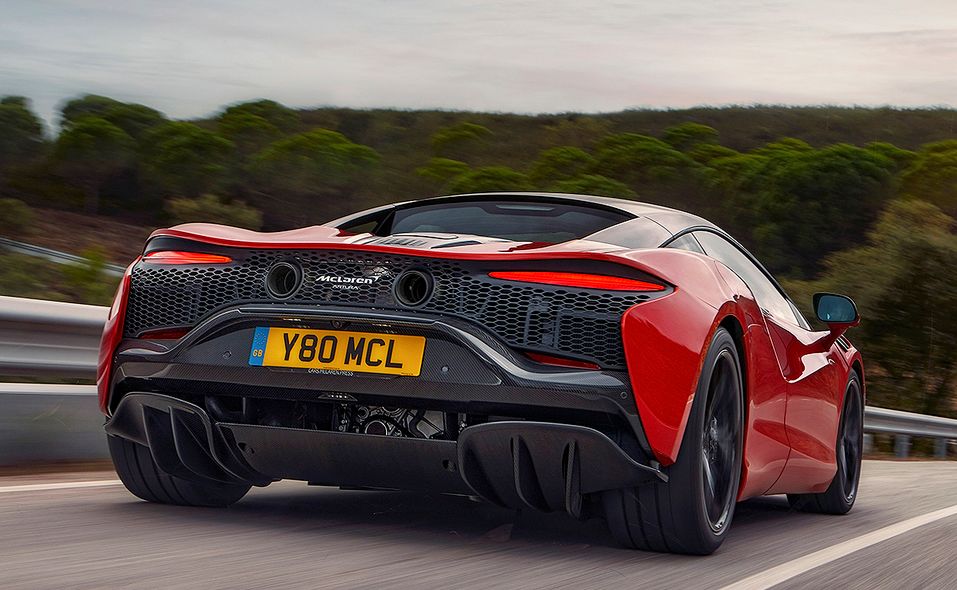 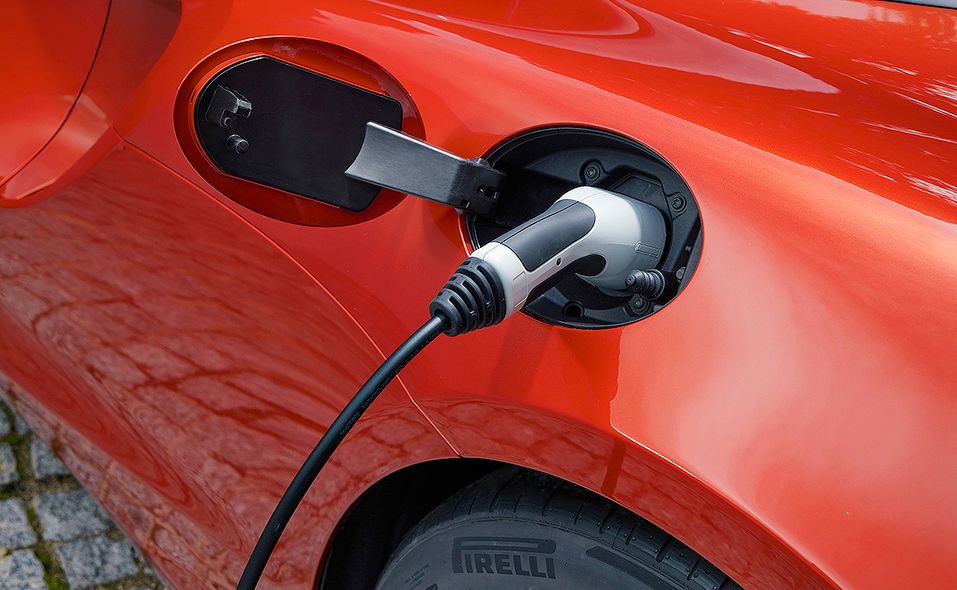 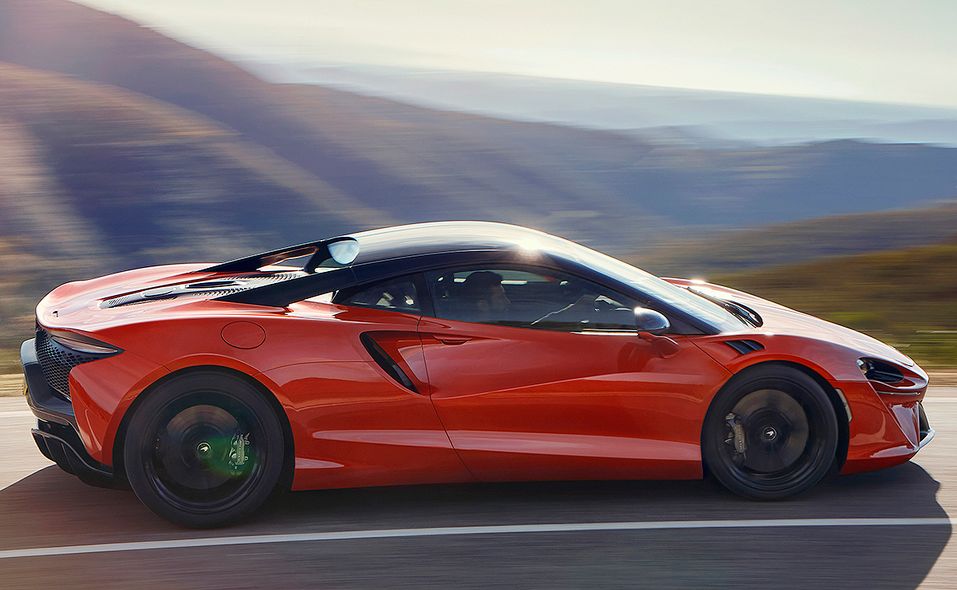 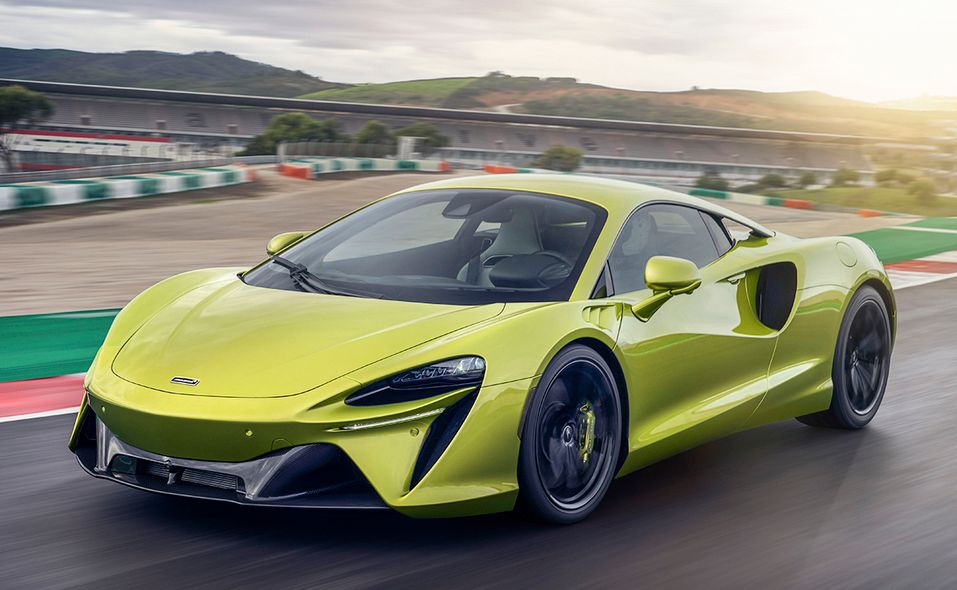 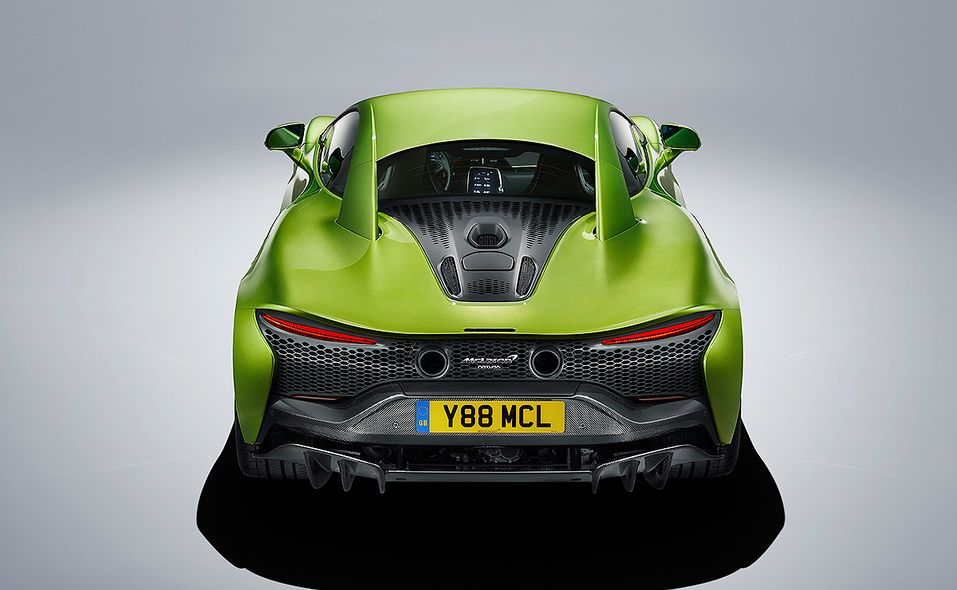 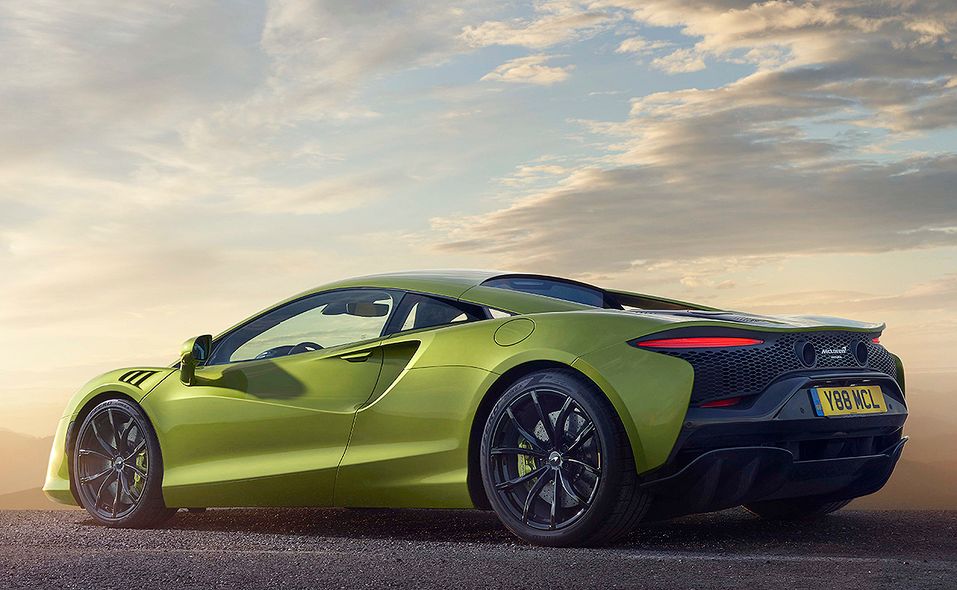 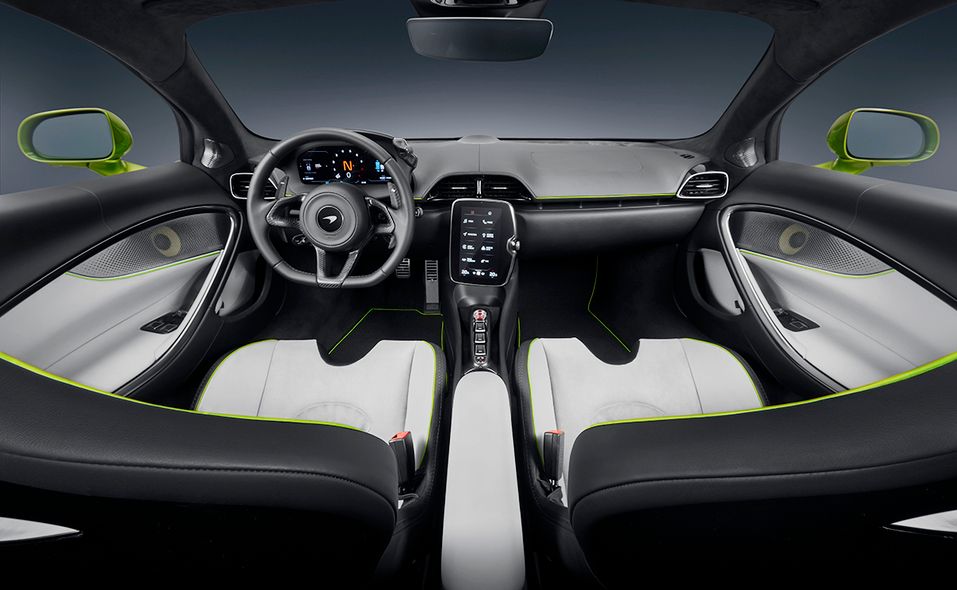 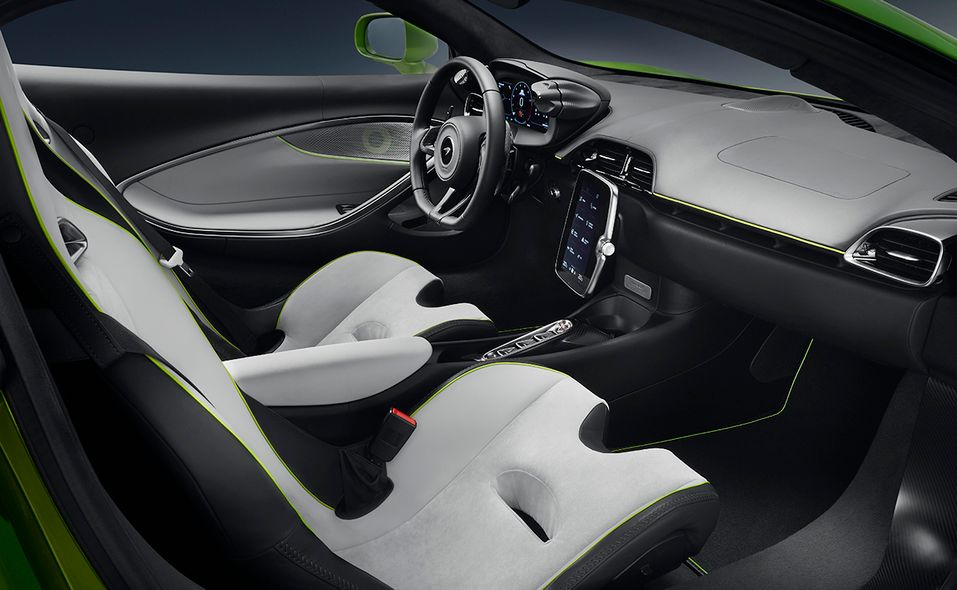 "We've got that great throttle response from the high-performance hybrid system," Corstorphine told Automotive News. "It's a big step. It's about that driving experience, but it's also about the versatility [and] offering the customers the chance at having a change in character of the car, whether they want to drive a car on the track, on the road or whether they're driving it in an urban environment when they want to just benefit from the EV capability in the car."

The Artura is instantly recognizable as a McLaren with styling cues such as thin headlights and taillights, sculpted panels for aerodynamics and dihedral doors. Elements from the 570S, the GT, the 720S and even the 765LT are visible throughout.

Inside, there is a new infotainment and connectivity system which is highlighted by an 8-inch touchscreen. Apple CarPlay and Android Auto are standard.

"The livability of the cars is important now," Corstorphine said. "It might seem less exciting than the outright performance, but it really matters to customers and how they genuinely use the car. It is absolutely a focus for us."

The Artura is set to arrive in the second half of the year and will cost from 226,000 euros in Germany. In the U.S. it will start from $229,500 including shipping. McLaren has slotted the Artura above the GT, but below the 720S coupe.

Maserati MC20 is Stellantis' most powerful, most expensive model

Maserati MC20 is Stellantis' most powerful, most expensive model