The Enyaq shares a platform with the VW ID3 and, like the forthcoming EV hatchback, will offer buyers a choice of battery sizes, power outputs, drivetrains and charging capabilities.

The Skoda Enyaq iV compact electric SUV will be the brand’s most expensive model when order books open later this year.

The new model is the first production SUV revealed to use parent Volkswagen Group’s new MEB platform. Prices will start at 33,800 euros ($40,150) in Germany before subsidies and go to 43,950 euros.

The Enyaq was unveiled on Tuesday evening in Prague, Czech Republic, via a webcast. It will go on sale first in Norway -- which has the highest electric-vehicle penetration in Europe -- starting this week, with deliveries starting across Europe in spring 2021.

The Enyaq shares a platform with the VW ID3 and, like the forthcoming EV hatchback, will offer buyers a choice of battery sizes, power outputs, drivetrains and charging capabilities.

“The MEB platform allows us to cater individually to our customers’ different needs and usage habits,” Skoda’s head of development, Christian Strube, said in a statement.

The entry Enyaq iV 50, with a 55-kilowatt-hour battery pack, will not be offered in the UK, but will be sold in Germany after the market introduction of the SUV's two longer-range launch models. The Enyaq iV 60 has a 62-kWh battery for a claimed 390 km (242 miles) range on the WLTP cycle, while the Enyaq iV 80 has an 82-kWh battery pack for a stated range of 510 km (316 miles).

A RS model based on the Enyaq iV 80 will go on sale in 2021 and will be the fastest accelerating version with a 0 to 100 kph time of 6.2 seconds. Both the vRS and 80X variants of the SUV will come with an additional electric motor powering the front wheels to give all-wheel drive instead of the standard rear-wheel drive.

Skoda said the packaging allowed by the MEB platform, which positions the batteries in the car’s floor, gives the compact Enyaq the interior space of the Kodiaq midsize SUV despite being shorter than the Octavia compact.

The car measures 4649 mm long, 1879 mm wide and 1616 mm tall. Trunk space is 585 liters, which is smaller than the 640 liters of space in the new Octavia compact wagon but bigger than the 521-liter trunk in the brand’s Karoq compact SUV.

The Founders Edition model is based on the Enyaq iV 80 and comes with a special grille illuminated by 130 LEDs positioned on the vertical slats. The so-called Crystal Face feature combines with the LED headlights and driving lights to give the driver an animated greeting or goodbye when the car is unlocked or locked in low light.

Skoda offers a series of design packs that replace the standard trim levels, with each giving a different cabin ambience. Loft, for example, which is standard on the 60 version, is based on “modern, homey apartments for young people” and features a two-tone dashboard design and brushed aluminum panels.

The dashboard is dominated by a 13-inch central screen, the largest available in a Skoda, that rises above the main structure. The screen is operated either by touch, a touch-slider, gesture or voice control, and the information is supplemented by an additional 5.3-inch screen in front of the driver. Apple or Android phone functions can be integrated via wireless SmartLink.

The Enyaq is the first Skoda to offer a head-up display with augmented reality. The augmented part of the display positions navigation instructions and information about the adaptive cruise control further up the windshield.

A 13-inch central screen dominates the Enyaq's interior. A 5.3-inch screen sits in front of the driver, and a head-up display has augmented-reality features.

The car’s adaptive cruise control is available in a predictive version that incorporates route data from the navigation system and traffic signs, and can also react to obstacles reported via online traffic data.

Skoda claims the Enyaq has a low drag coefficient of 0.27 in part because of low rolling-resistance tires fitted to either 19- or 20-inch wheels depending on model.

Also helping the car’s range in cold climates is an optional heat pump that warms the air flowing into the car by compressing refrigerant.

Skoda says this cuts the battery power needed to run the high-voltage heater by approximately 3 to 4 kWh per 100 km, increasing the range in cold temperatures by 30 percent compared with EVs without a heat pump.

LED lighting in the Enyaq's grille can display a customized greeting to drivers.

The Enyaq will be the second VW Group MEB car to arrive after the plannd arrival of the VW ID3 hatchback later this month.

The MEB platform will also be used by Seat and Audi.

Seat said in July that its first MEB car will come from its Cupra subbrand and will be positioned as a high-riding hot hatchback. The car, called el-Born, will go on sale next year.

Skoda will start production of the Enyaq at its plant in Mlada Bolesav, Czech Republic, later this year.

The production strategy differs from that of Seat and Audi, which will make their first MEB cars at VW’s lead electric vehicle facility in Zwickau, Germany, alongside the VW ID3. 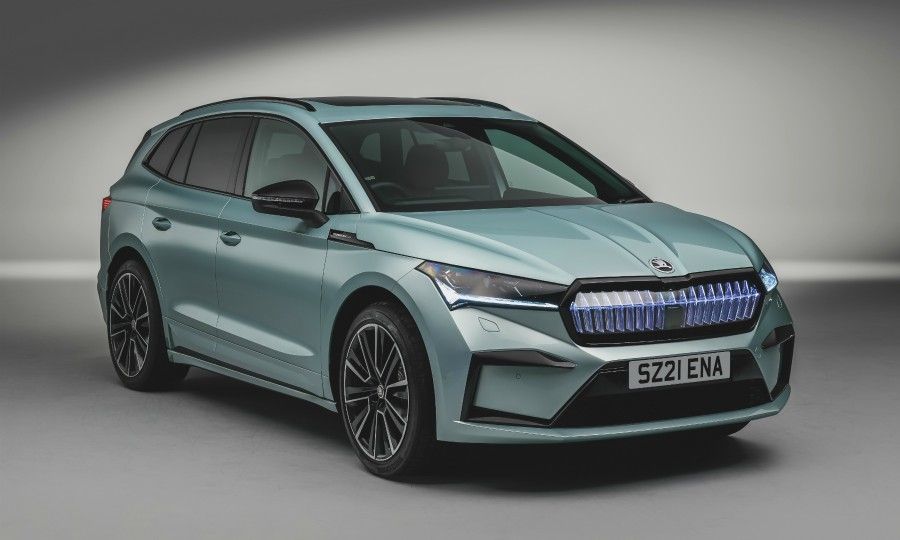 The new EV will slot below the brand's Enyaq, shown. 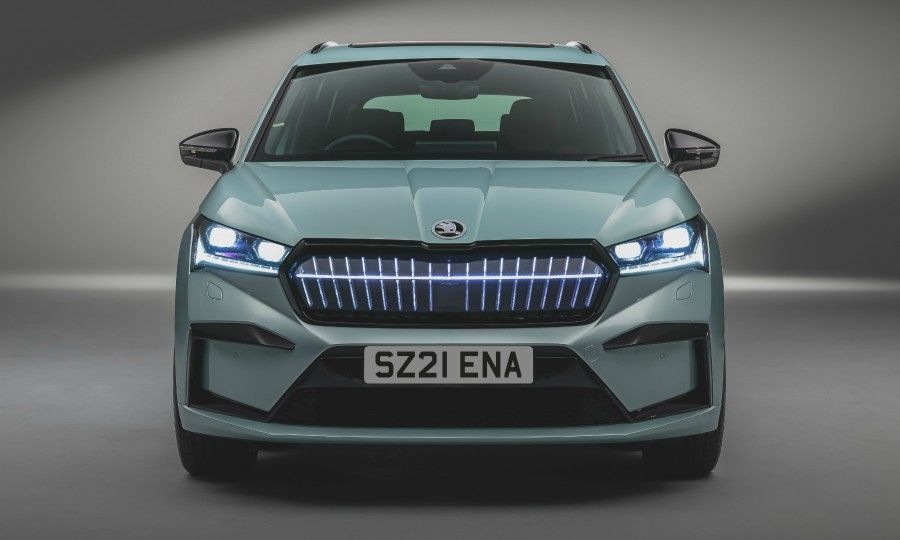 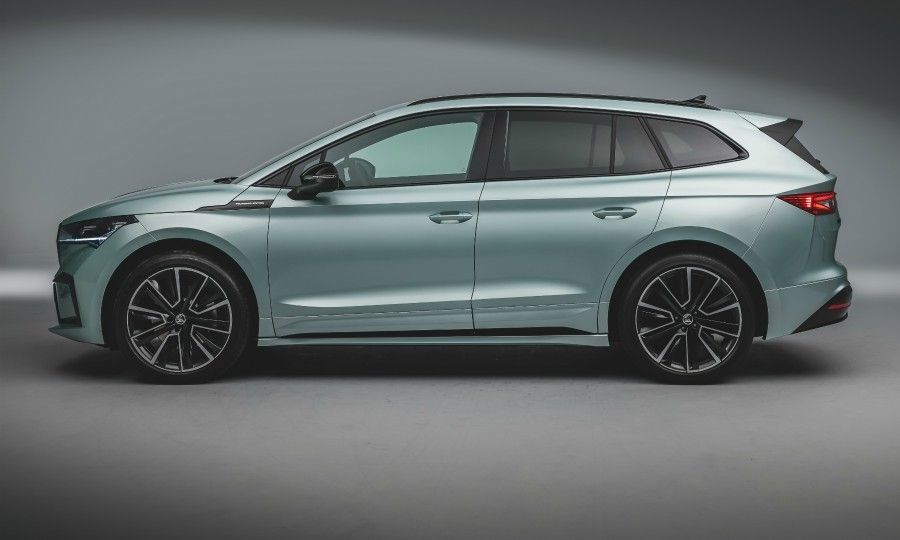 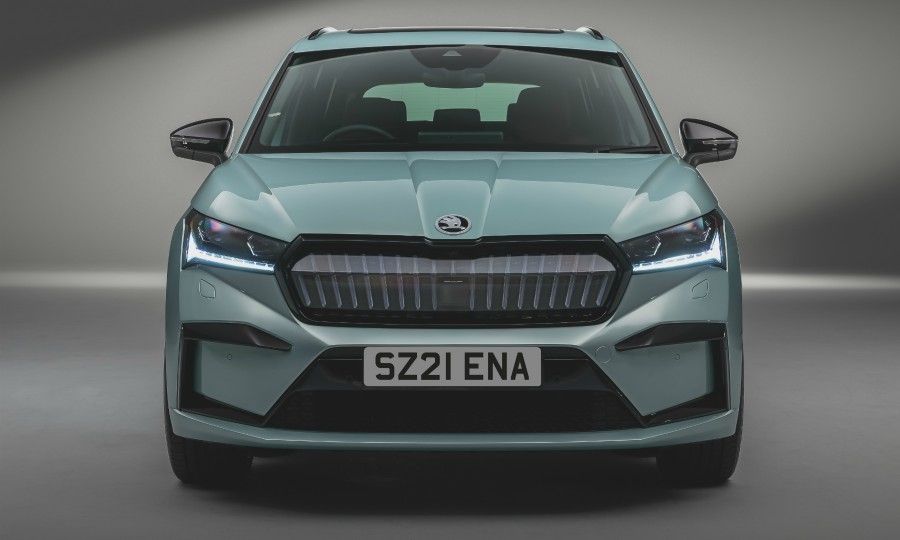 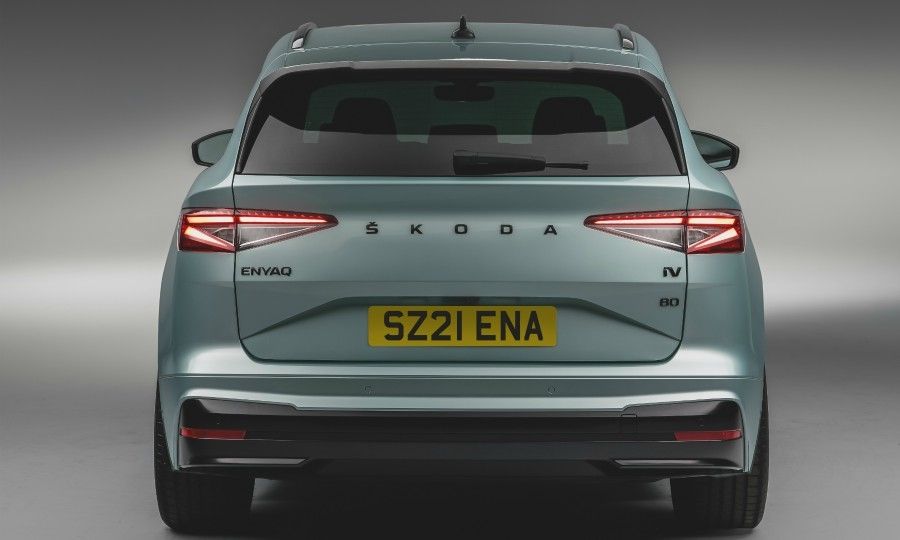 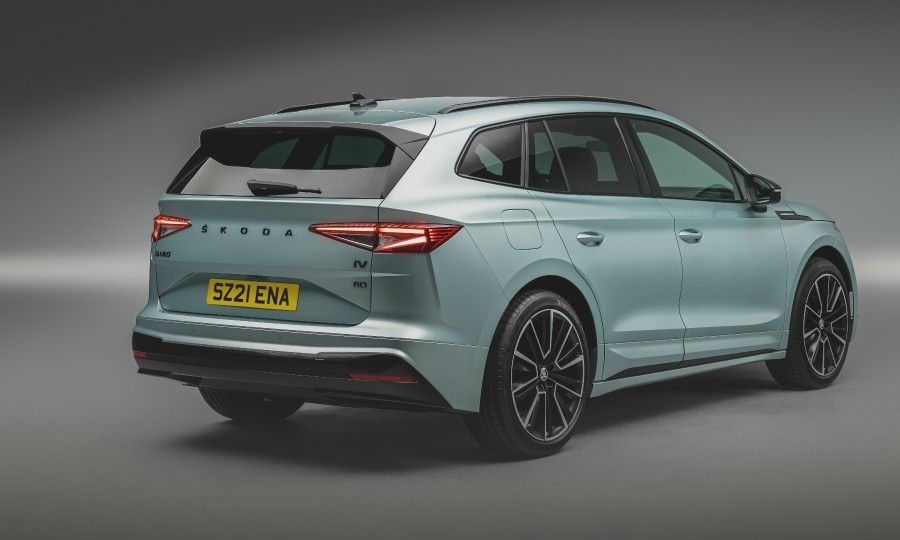 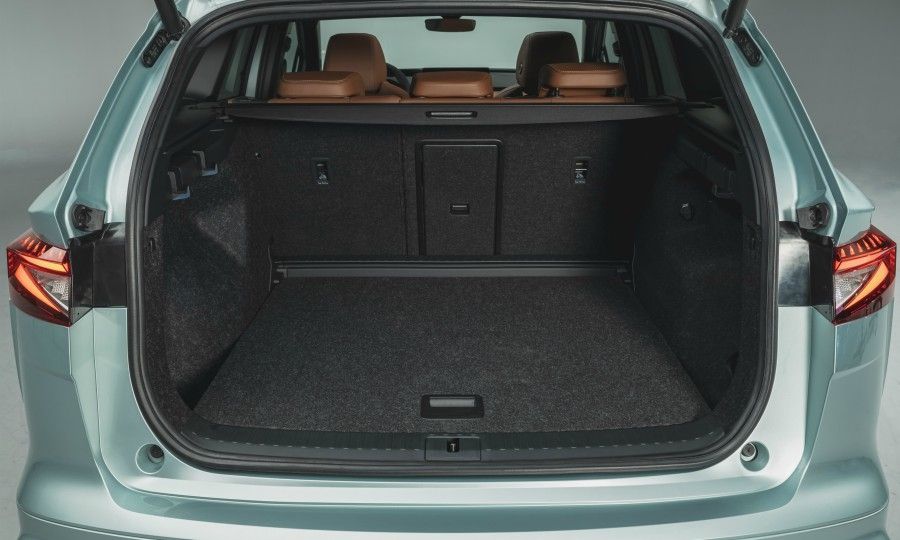 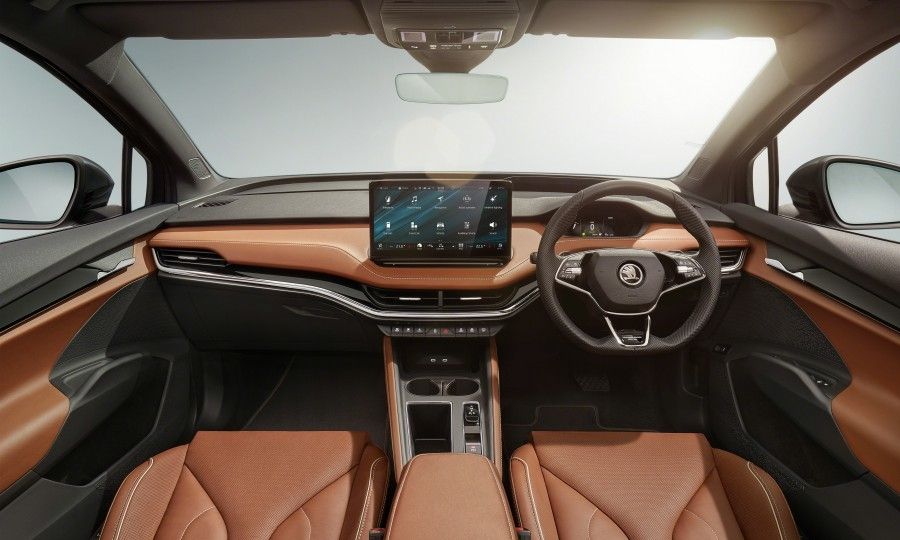 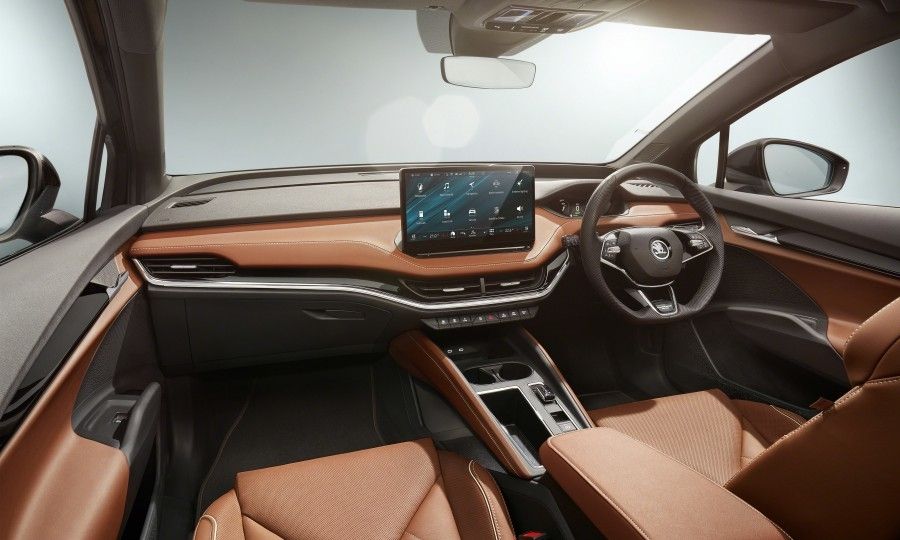 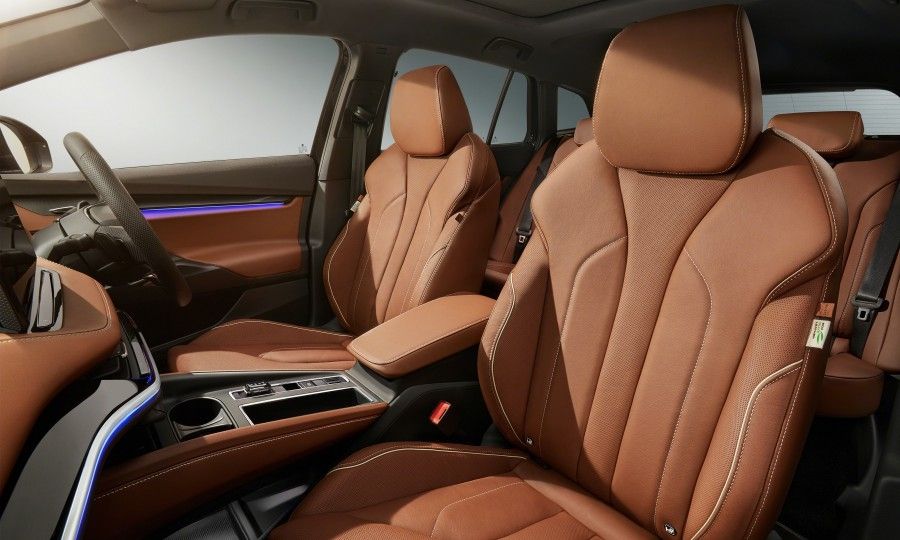 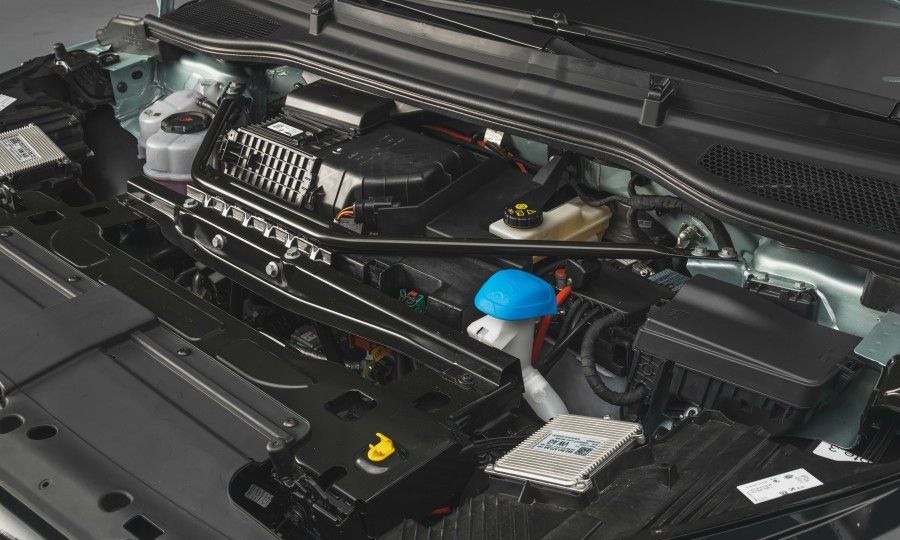