LOS ANGELES -- The Mustang Mach-E not only marks a serious foray into battery-electric vehicles by Ford, it also represents a risky gamble of expanding a venerable nameplate beyond the pony-car body style that defined it for more than a half-century.

The crossover, offered in rear-wheel-drive and all-wheel-drive versions, is Ford's answer to Tesla, General Motors and others that beat it to market with a long-range EV. The Mach-E has a range of 483 km (300 miles).

Ford executives said they have learned from, and are improving on, what their rivals have done to offer a comprehensive EV strategy that includes an extensive charging network, thousands of certified service centers and access to a full federal tax credit some other automakers can no longer utilize.

The Mach-E marks a drastic change in strategy from Ford's earlier electrification efforts, which produced forgettable — and now discontinued — hybrid and electric sedans. It's relying on the cachet of the Mustang name to win over buyers who would otherwise be skeptical of EVs.

"We're asking this vehicle to accomplish a lot," said Paul Johnston, a vehicle architecture manager. "It's a [utility vehicle], it's an EV and it's a Mustang."

That decision was made shortly after CEO Jim Hackett took over in 2017. Designers decided to craft a "Mustang-inspired" vehicle, but eventually chose to add it to the pony car family after realizing similarities between EV and sports car customers.

At the same time, demand for the Mustang and other sport coupes has steadily tailed off as consumers abandon the overall car market for light trucks. Mustang sales in the U.S. sank 10 percent to 55,365 deliveries through September.

The Mach-E is the first Mustang crossover and the first all-wheel-drive Mustang. It will be built in Mexico, at the automaker's Cuautitlan assembly plant that used to manufacture the Fiesta sedan.

While traditional enthusiasts might scoff at the notion of expanding the nameplate, experts say the benefits outweigh the risks.

"Ford is promising compelling performance and attractive styling that pay proper homage to the Mustang brand," Karl Brauer, executive publisher at Kelley Blue Book and Autotrader, said in a statement. "If that holds true, borrowing Ford's most iconic name for its new electric SUV won't cause any damage, and might actually contribute to awareness and sales." 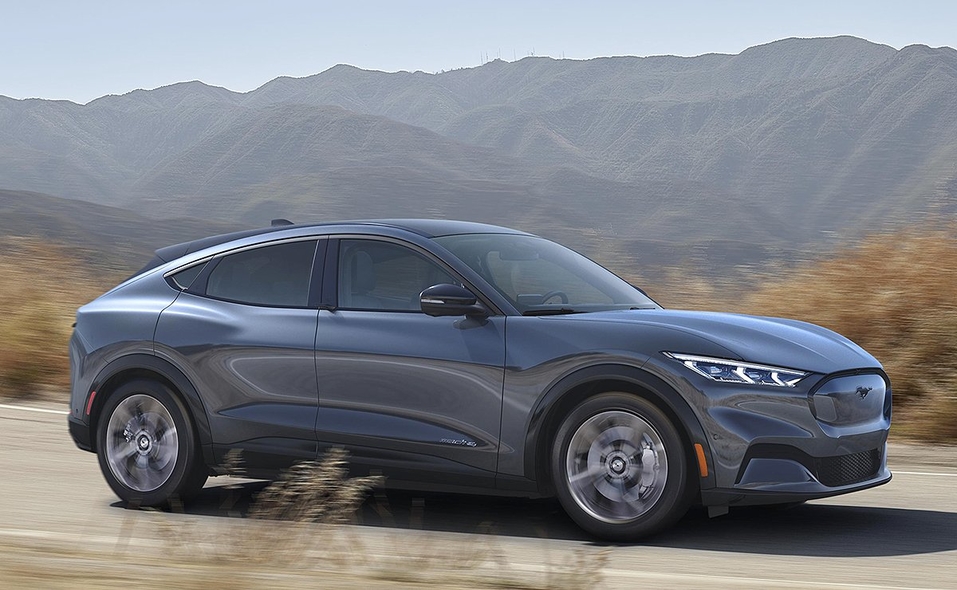 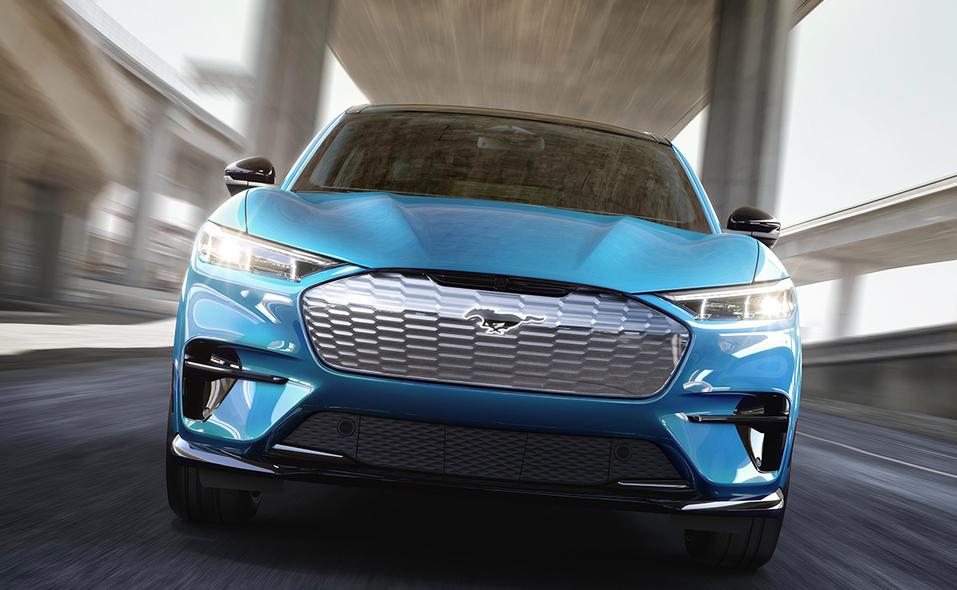 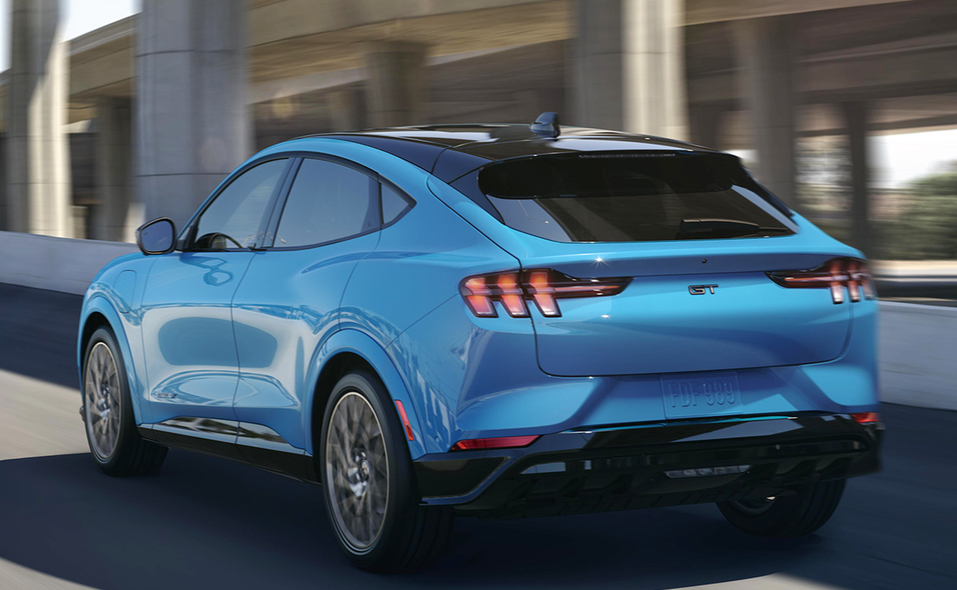 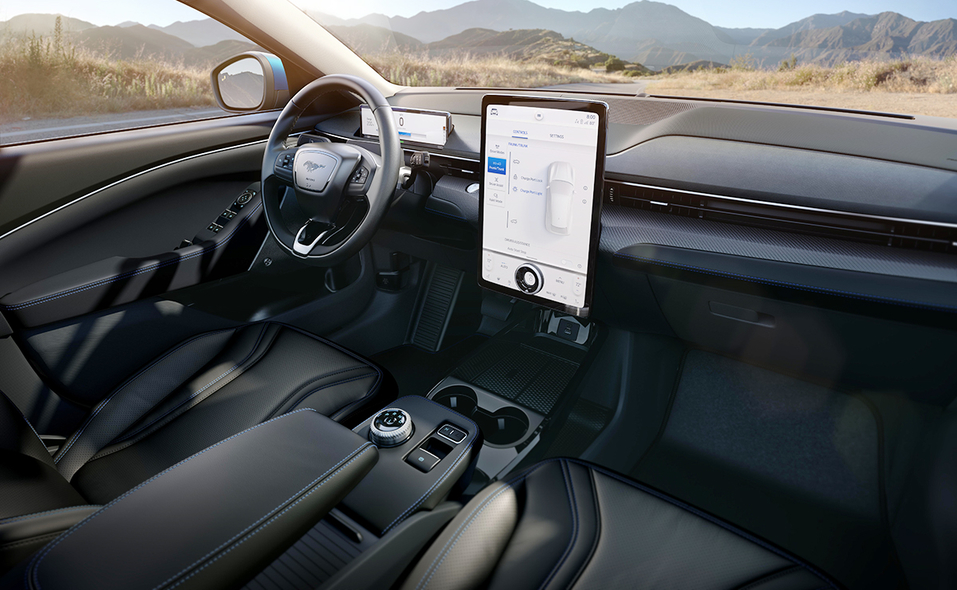 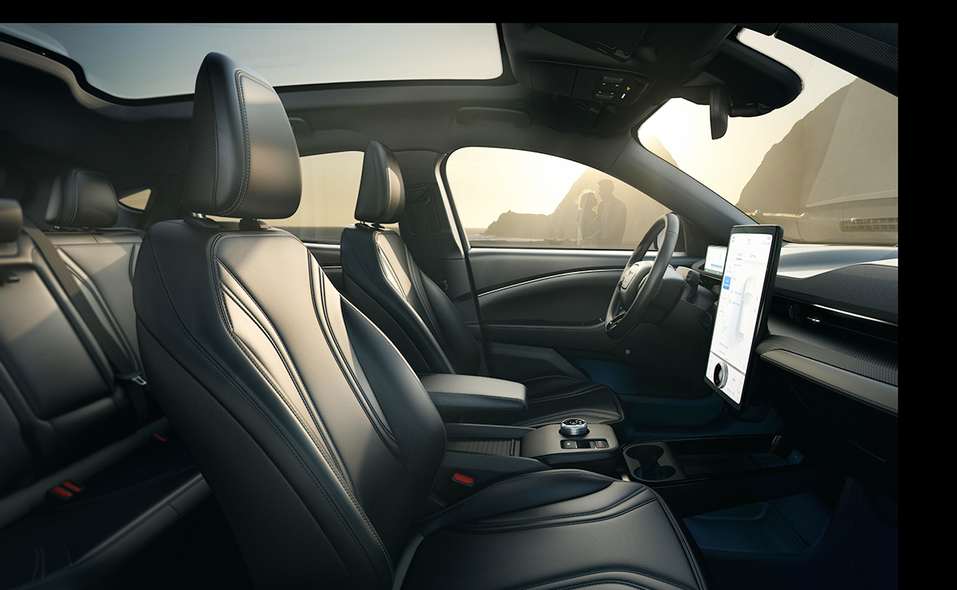 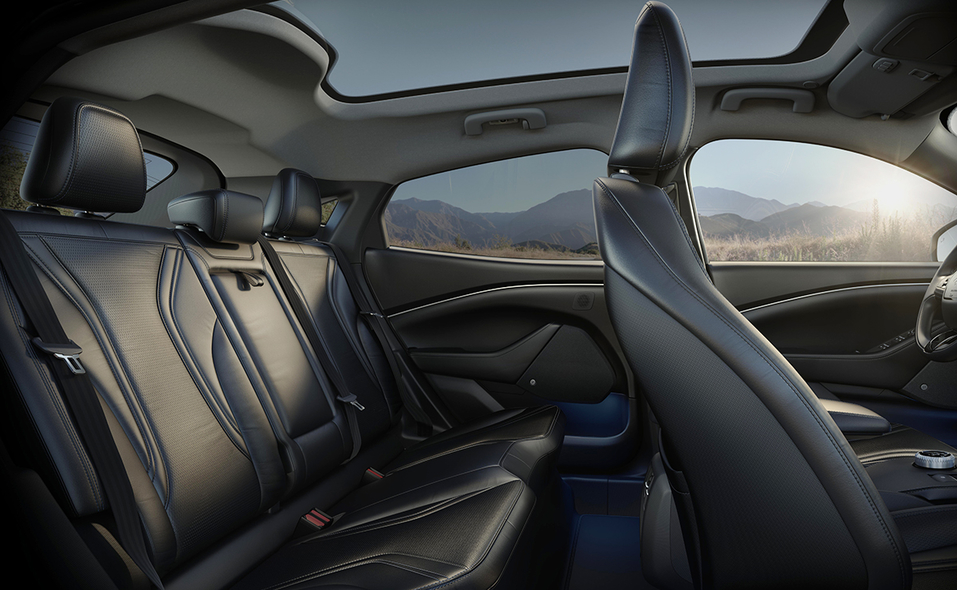 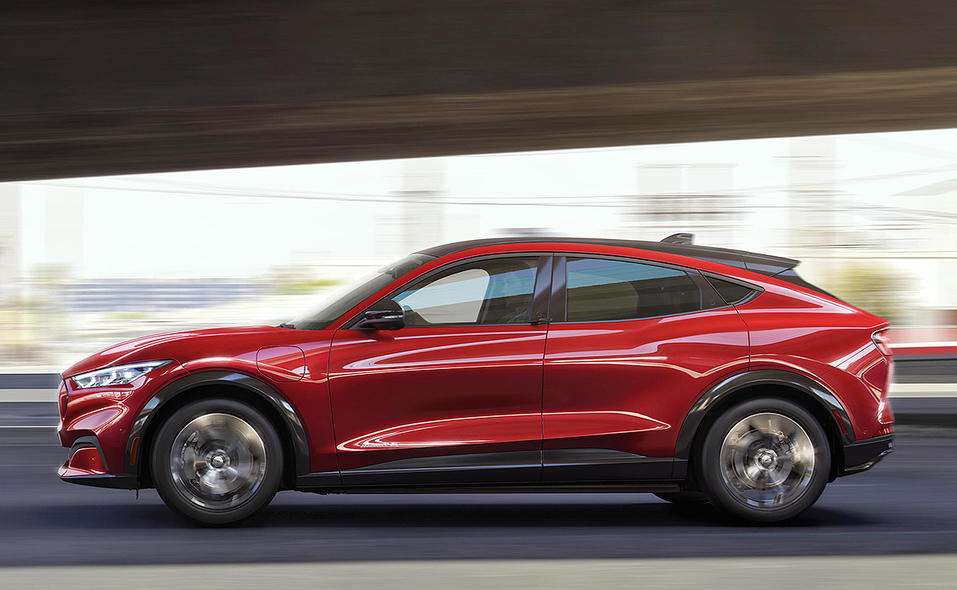 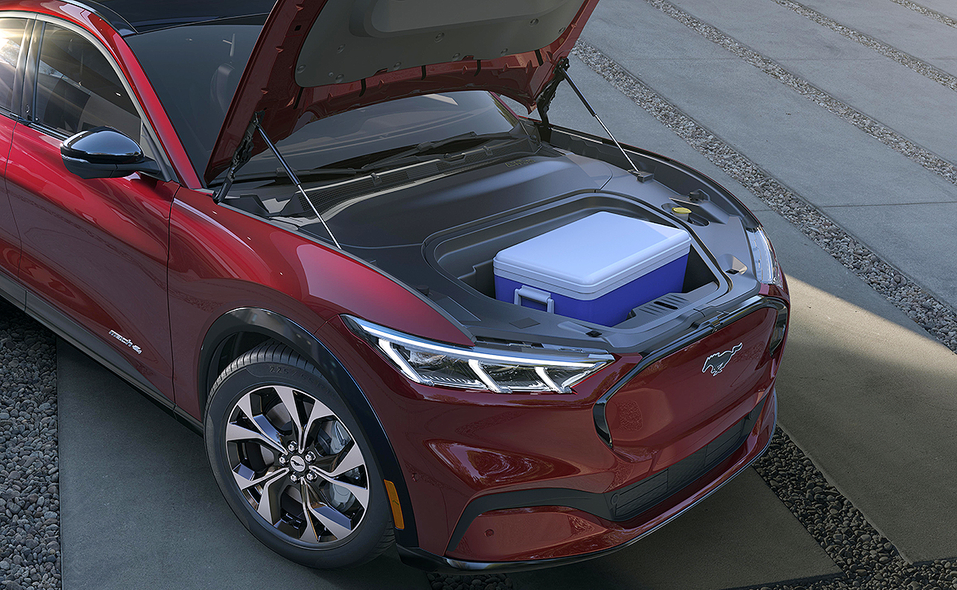 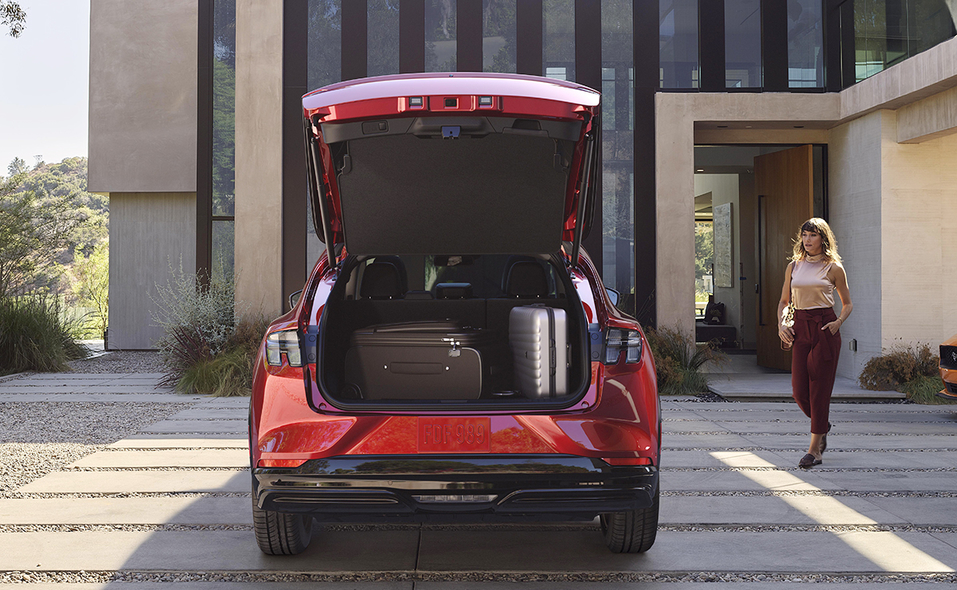 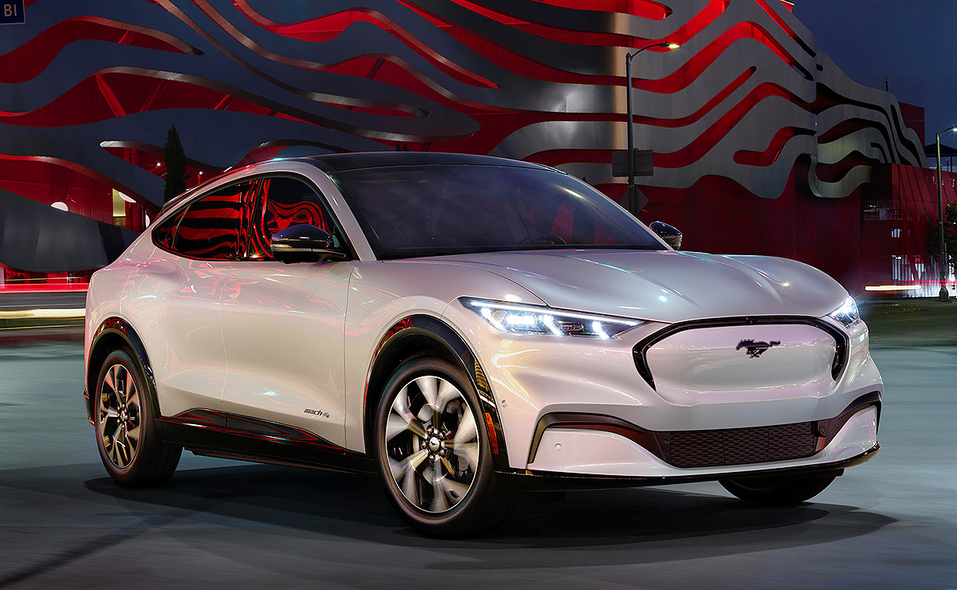 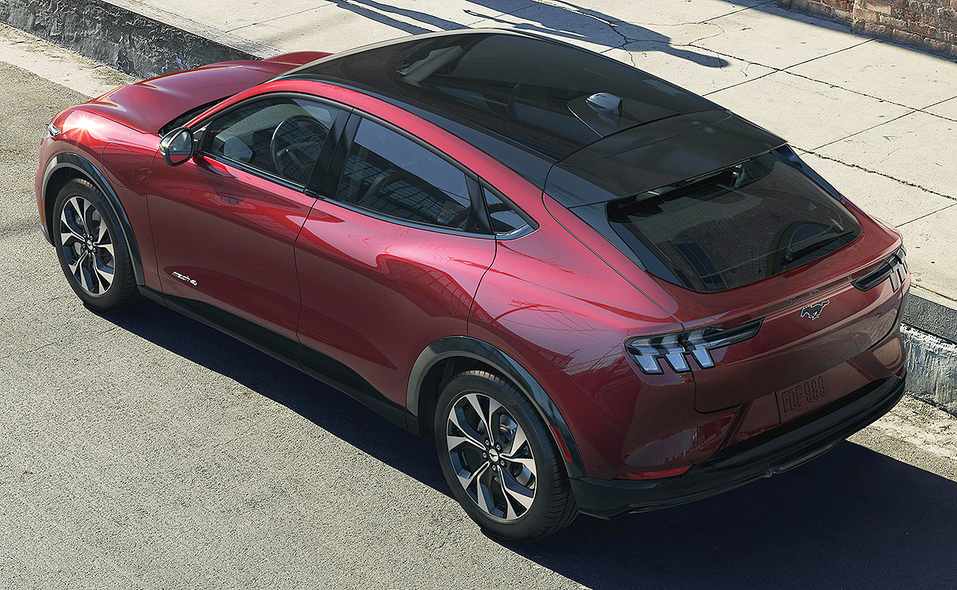 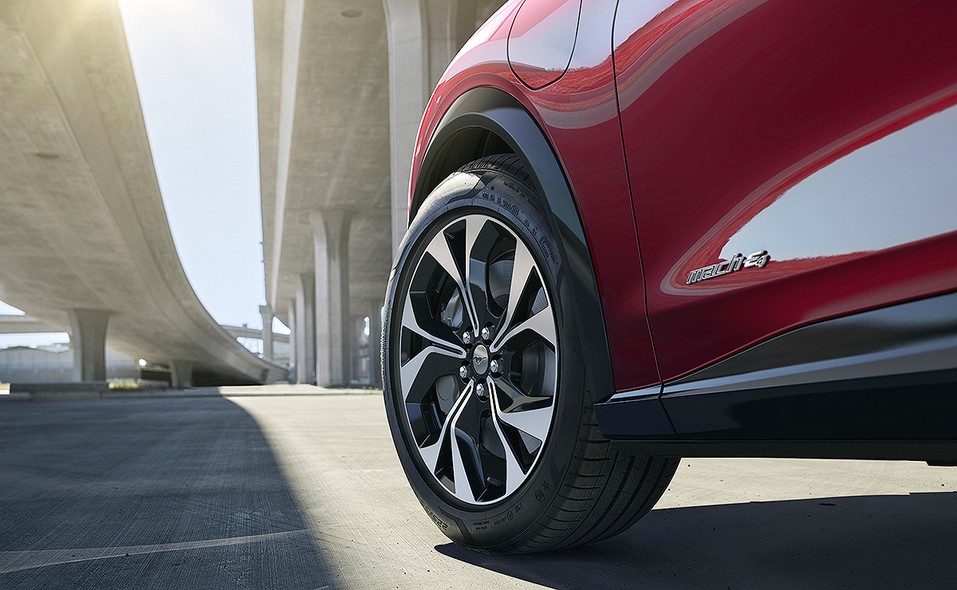 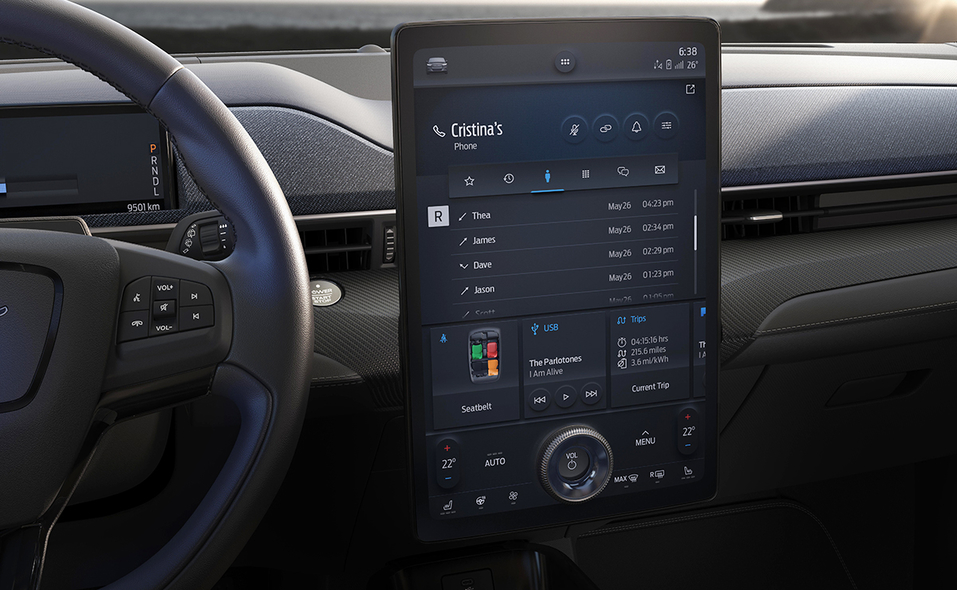 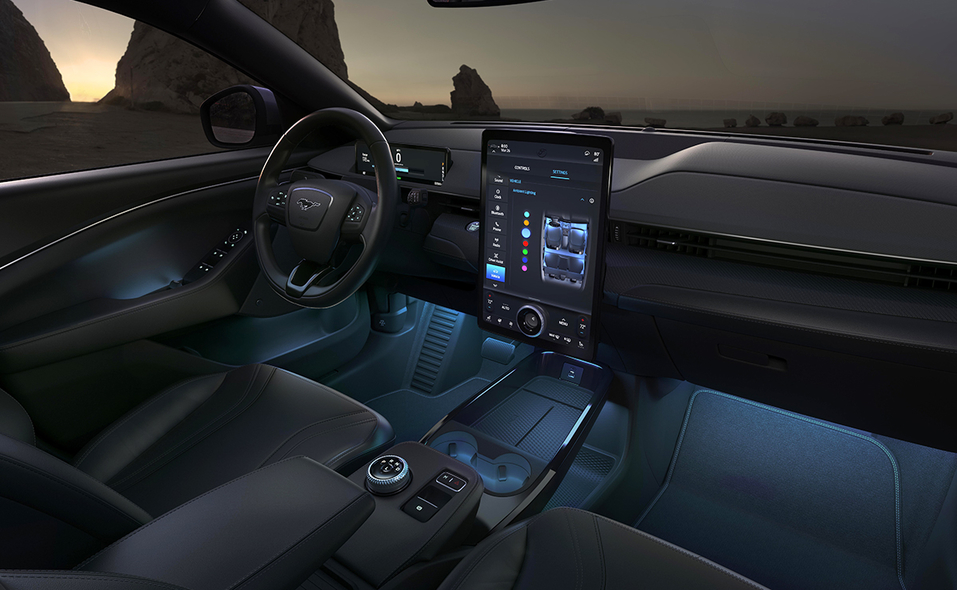 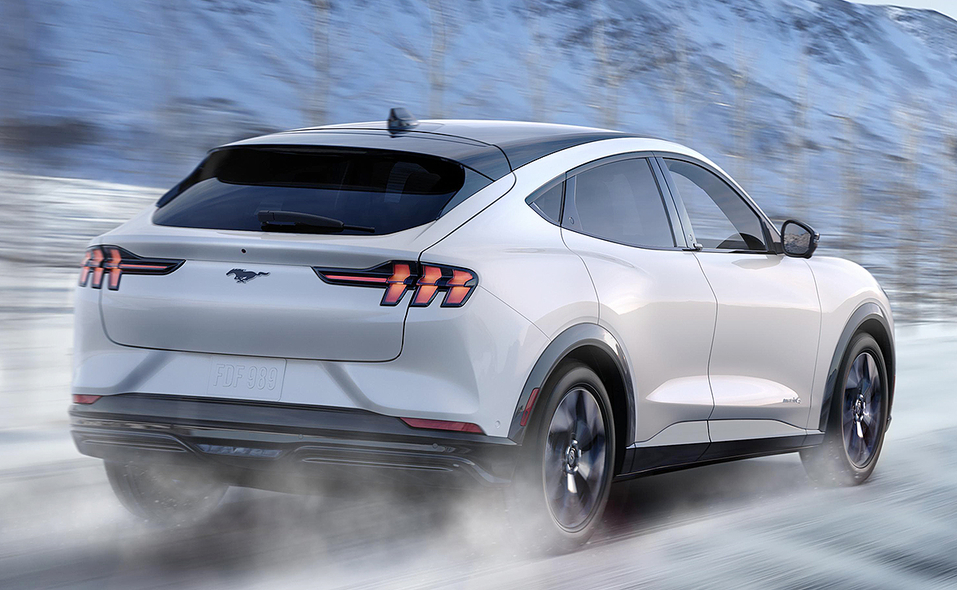 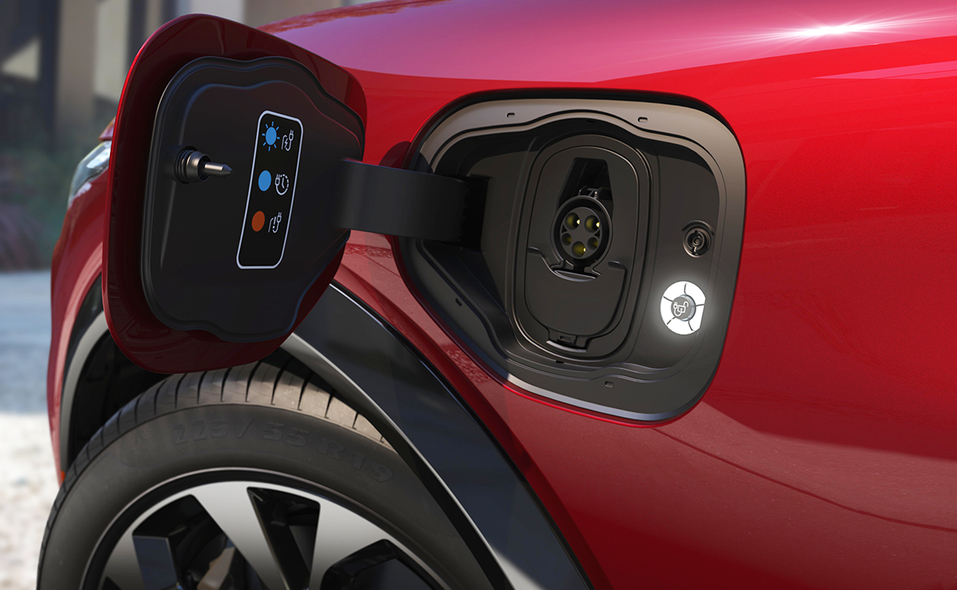 The Mach-E will be available in standard-range (75.7-kilowatt-hour lithium ion battery) and extended-range (98.8-kWh battery) versions, with a targeted EPA-estimated range of at least 300 miles in the rear-wheel-drive configuration, Ford said. The battery is located under the floor between the two axles.

In addition to a limited-run First Edition, it will be available in four trims: Select, California Route 1, Premium and GT.

The GT, which only comes in extended-range and awd, also includes some additional design features not available on other trims: a polycarbonate grille with a separate color from the rest of the body, exclusive wheel designs and a pony logo that lights up.

"The Mustang Mach-E wholeheartedly rejects the notion that electric vehicles are only good at reducing gas consumption," Hau Thai-Tang, Ford's chief product development and purchasing officer, said in a statement. "People want a car that's thrilling to drive, that looks gorgeous and that can easily adapt to their lifestyle -- and the Mustang Mach-E delivers all of these in unmatched style."

The rear trunk has 29 cubic feet (821 liters) of space, which jumps to 59.6 cubic feet when the back seats are down. The crossover also has a 4.8-cubic-foot front trunk that has a drain, allowing customers to pack it with ice for use as a cooler.

It includes three drive modes: Whisper, Engage and Unbridled. Each are specifically tuned for a different driving experience. The interior of the Mach-E features design cues similar to Tesla, including a 15.5-inch touchscreen and minimalist dashboard. It will come with the next-generation Sync infotainment system and have over-the-air update capability. It also includes animal-free materials including synthetic leathers on the steering wheel and seats.

The Mach-E is set to go on sale late next year, although the GT version won't be available until spring 2021. Brand executives say they're comfortable with the timing, despite intense competition.

The Mach-E, which will be sold globally, represents the centerpiece of Ford's $11 billion investment in electrified vehicles through 2022. The company is expected to introduce 40 models over that time period, including 16 BEVs.

Aside from the Mach-E, Ford also is planning an electric F-150 and an undisclosed EV with startup Rivian.

Ford executives on Sunday did not discuss the Mach-E's pricing but said it would be between $40,000 and $50,000 in the U.S. Customers will have access to a $7,500 federal tax credit, further lowering the price.

Executive Chairman Bill Ford said the vehicle will "strike like forked lightning," echoing a line his great-grandfather and the company's founder, Henry Ford, once used about the Model T.

Analysts say the Mach-E could catapult Ford among the EV leaders, but its polarizing design also carries the risk of becoming the Model T's ignominious successor.

"If the vehicle is outstanding and well-received, Ford will win big," Michael Harley, executive editor for Kelley Blue Book, said in a statement. "If it falls short, the company will have another Edsel on its hands."

Lamborghini to invest at least $1.8B in path toward electrification, report says