The Oli concept's flat windshield, roof and hood save materials and would be easier and cheaper to build, Citroen says. Wheels are a weight- and money-saving blend of steel and aluminum.

To read more about why Citroen is turning to the past for its new logo, click here.

There are no plans to build the Oli, Citroen CEO Vincent Cobee says, unlike the recent Ami One concept that went into production as the Ami electric quadricycle in 2020 -- and now has an Opel variant.

Instead, he says, the Oli is more of a possible road map toward the goal of an accessible and environmentally friendly electric car that is also desirable. Some of its innovations, however, will appear on future Citroens.

"We want to make a statement about affordable, responsible electric cars that exude freedom," he told Automotive News Europe. "Oli is a laboratory that demonstrates that it’s not completely crazy to aim at that."

The Oli name (pronounced "all e," as in electric) is meant to refer to the Ami, the automaker says, but unlike that car, which evoked the small Ami 2CV variant from the late 1960s, the Oli does not refer to past Citroen models.

The reveal of the Oli on Thursday coincides with a new logo for Citroen, a two-dimensional rendering of the brand’s historic chevrons that is closely related to those from the brand’s 100-year history.

The Oli’s utilitarian shape reflects Cobee’s and design chief Pierre Leclercq’s belief that "form follows function," Cobee said. "Citroen is not a sports-car brand," he said, "and because we wanted (the messages to be) recyclable, affordable, attractive and efficient, we wanted to start with form equals function." 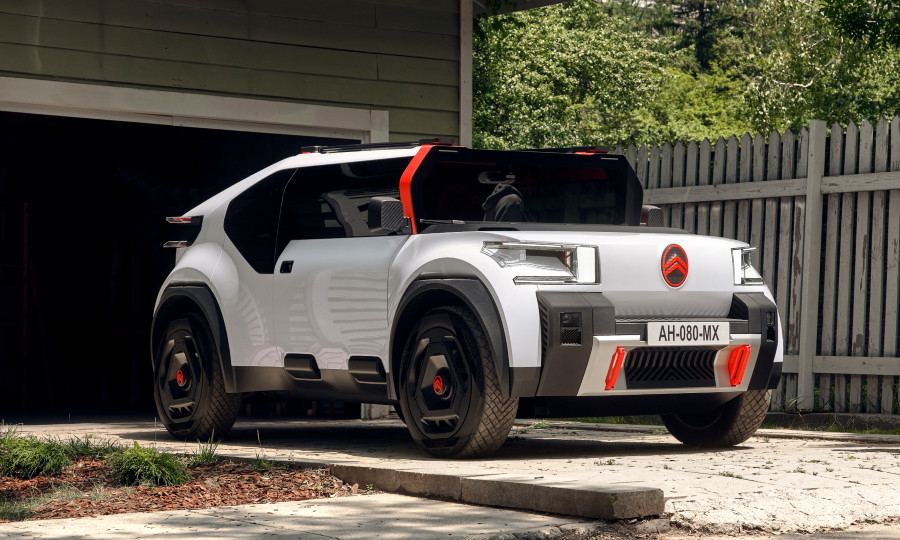 "The point of a concept car is to make you think," Cobee says of the Citroen Oli, which features a flat windshield as well as recycled and recyclable materials throughout. 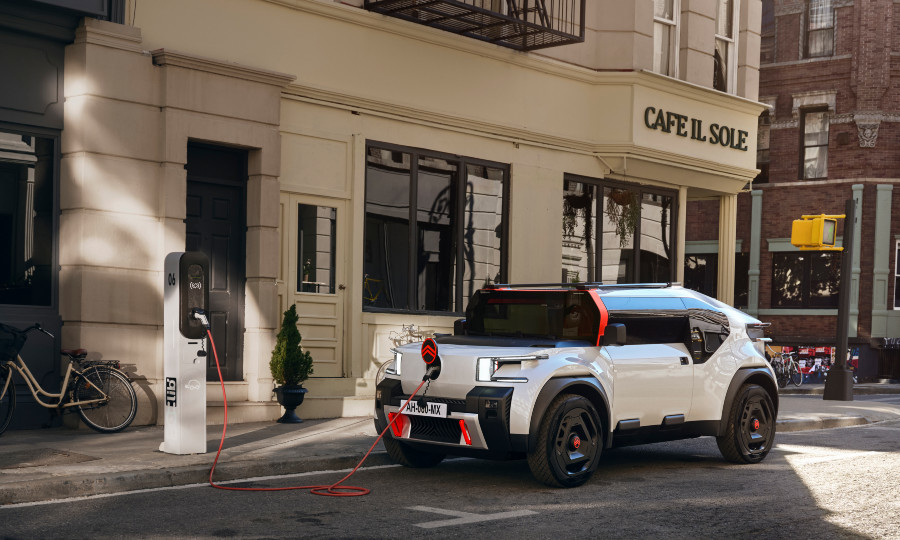 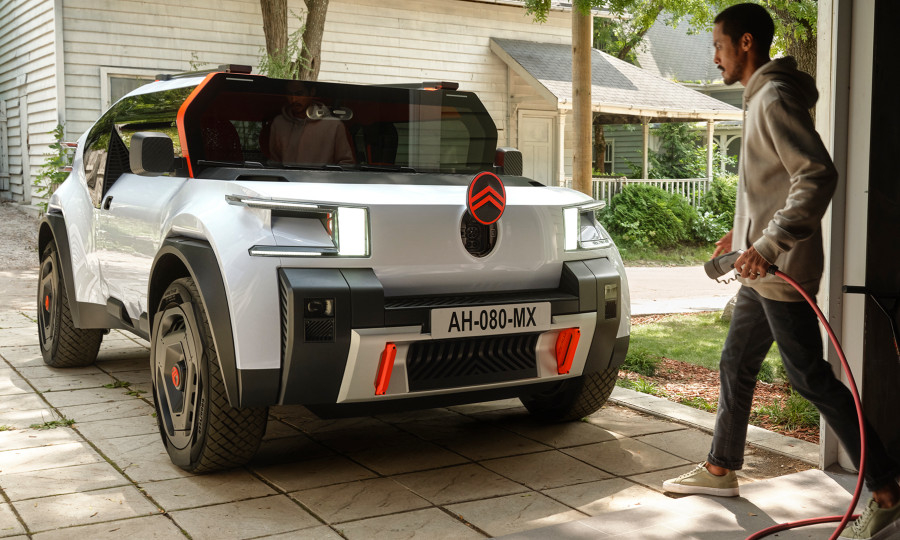 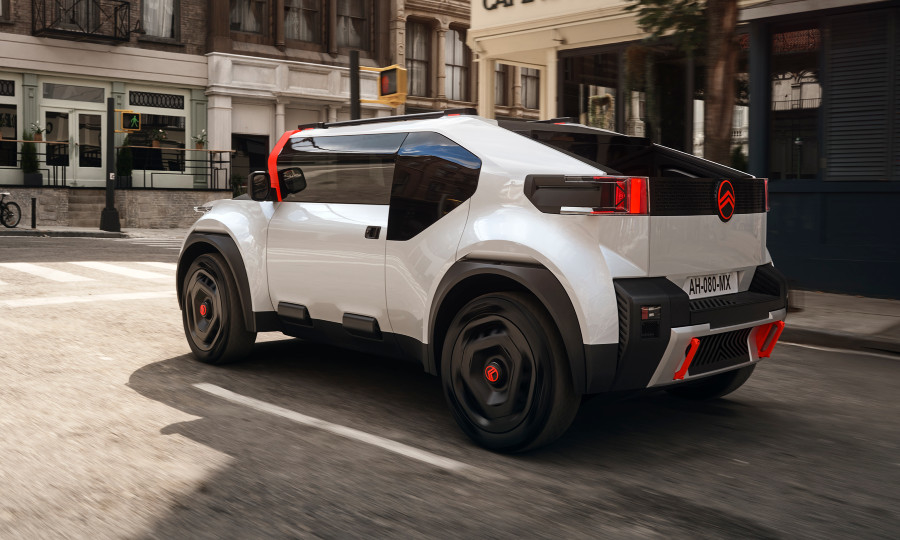 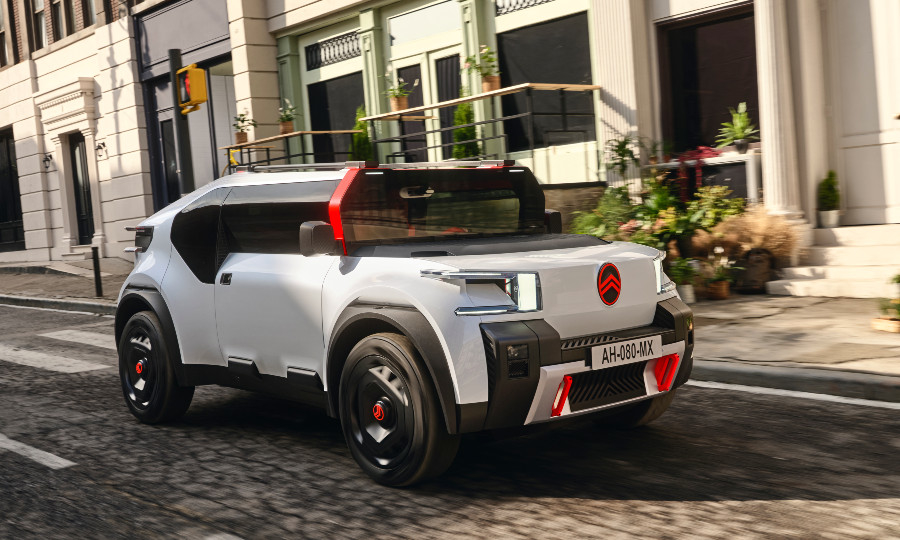 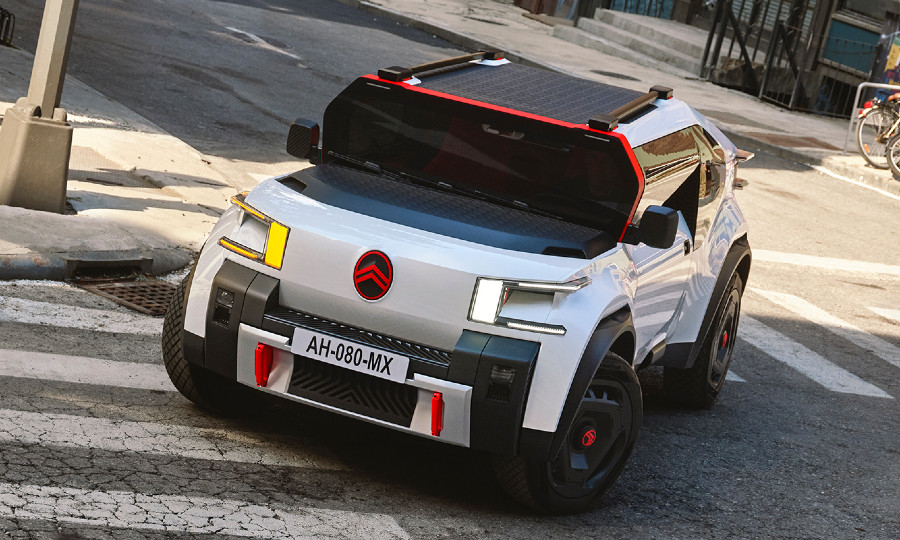 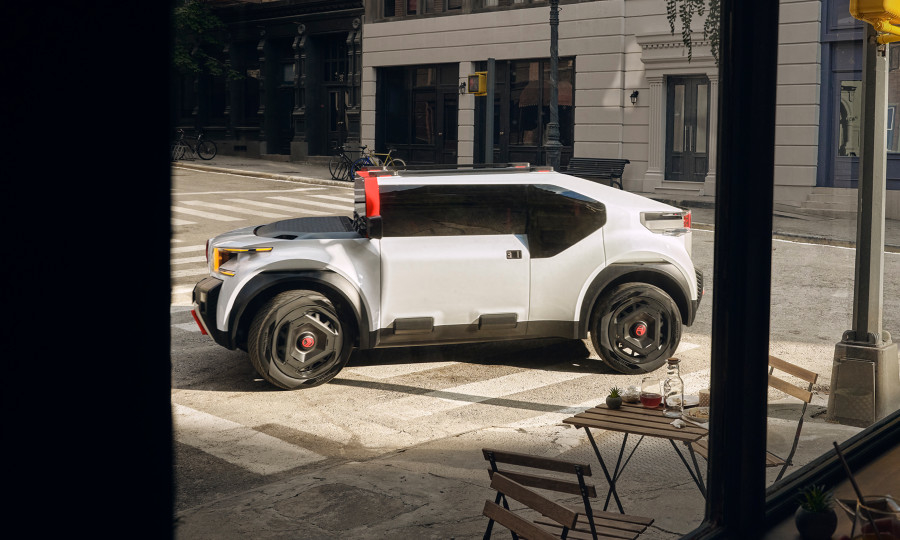 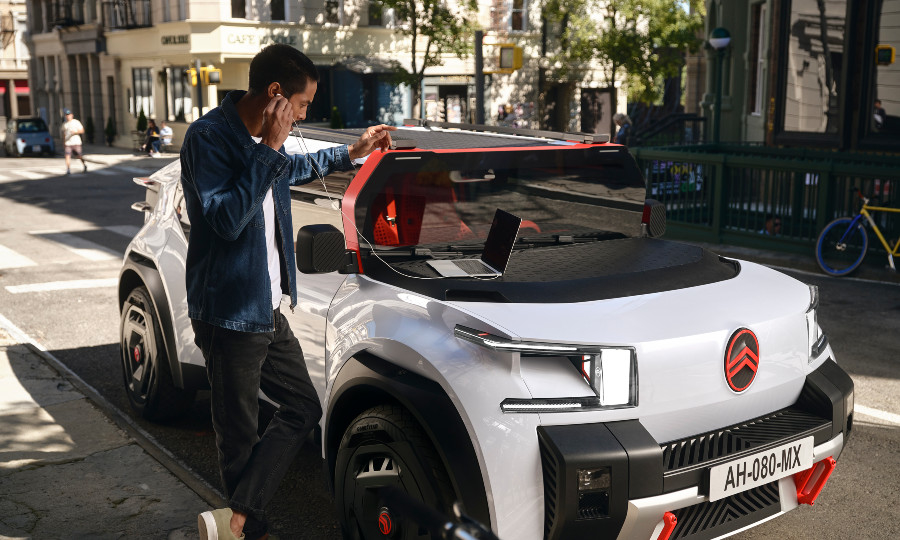 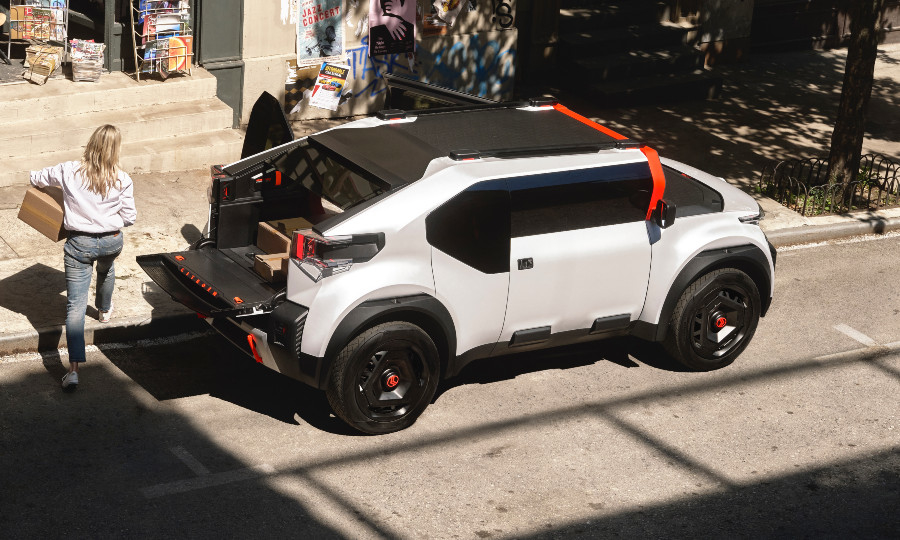 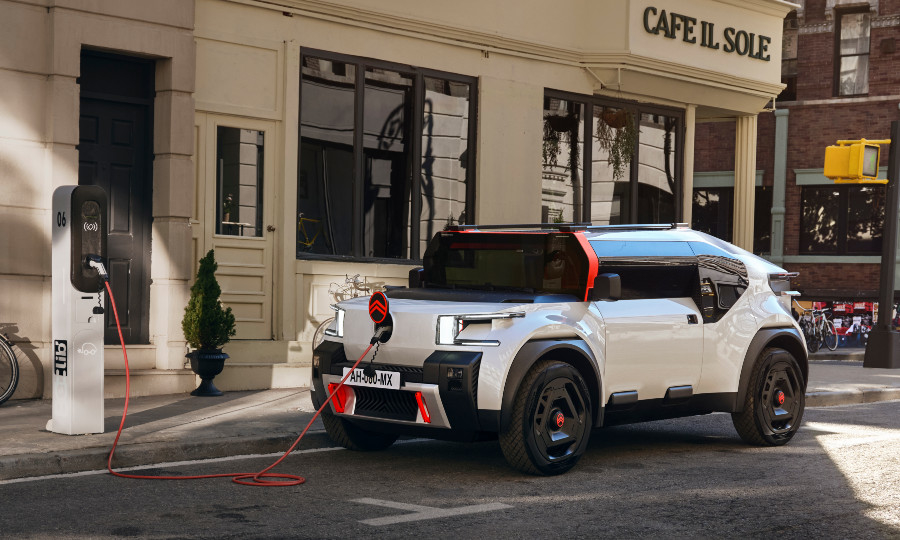 To achieve a smaller environmental footprint, the Oli employs innovative technologies such as Goodyear Eagle GO tires that use a tread partly made from sustainable materials including natural rubbler, sunflower oil, rice husks and pine resin. Like tires on heavy-duty trucks, the Eagle GO can be recapped with a new tread several times, giving it a lifespan of up to 500,000 km, Goodyear says.

Wheels are a combination of steel for strength and low cost, and aluminum for weight savings.

Interior materials also reflect this ethos. The tubular-frame suspension-style seats, which Citroen says use 80 percent fewer parts than a conventional seat, are made of 3D-printed recycled polyurethane from BASF to eliminate waste and save weigh. Floor materials are also polyurethane, (which is molded like a sneaker sole) to reduce material diversity and aid in recycling.

Oli’s flat roof, rear deck and hood are constructed from a recycled cardboard honeycomb covered in resin that weighs 50 percent less than steel – but is also able to support a person’s weight.

Perhaps the most notable design element is the flat windshield, reminiscent of an old VW or U.S. Army Jeep, which allows for less material and a cheaper, simpler production process. Because the Oli is a concept, aerodynamics are less of a concern than they would be in the real world, Citroen designers say, but an "Aero Duct" system at the leading edge of the hood directs air above the roof to create a "curtain" effect.

Other complexity-reducing measures include identical left and right front doors (mounted in the opposite orientation) without soundproofing, wiring or speakers, and identical front and rear bumpers, made by Plastic Omnium of 50 percent recycled materials.

The Oli's tube-frame seats have 70 percent fewer parts than conventional ones, Citroen says. Much of the interior is made of recycled and easily recyclable polyurethane from BASF.

Access to the cabin is unobstructed thanks to rear-hinged rear doors. Inside, infotainment is controlled by the user’s smartphone (as in the Ami), and there are detachable Bluetooth speakers, and built-in holders for earbuds and tablets behind the front seats.

The Oli is actually a small pickup, Citroen says, with a flat deck behind the rear window covering a bed rather than a hatchback or conventional trunk. To create a large, open space, the rear-seat headrests fold into the roof, the seat folds flat and the rear glass opens upward.

Cobee said the Oli might be seen as a radical departure to those used to Citroen’s current design language, but he hoped it would spark conversations about what a future electric car should represent.

"If it comes out in a polarizing way, that's fine," he said. "The point of a concept car is to make you think."