The Kamiq's grille is framed by bold LED driving lights that sit above the main headlights.

Skoda's new Kamiq small SUV will give the brand access to new customers who want a high-riding car for city driving, the automaker said.

The Volkswagen Group brand released pictures of the Kamiq on Wednesday ahead of its unveiling at the Geneva auto show on March 5.

Skoda is pitching the Kamiq as a urban crossover that blends the agility of a compact car with the ride height of an SUV. The car is 37mm higher than the company’s new Scala compact model.

The launch of Skoda’s third SUV taps a new customer base and rounds out the brand’s SUV lineup, CEO Bernhard Maier said in a statement. “It’s an important component of our model campaign,” he said.

The Kamiq fits below the Karoq compact SUV and Kodiaq midsize SUV in Skoda’s range. The Kodiaq was the second best-selling midsize SUV in Europe last year behind the Peugeot 5008 at just over 66,000 sold while the Karoq was ninth in its sector in its first full year of sales, with 82,032 sold, according to figures from JATO Dynamics. The Kamiq will be the company’s second best-selling SUV, Skoda has said.

Like the Seat Arona and VW T-Roc small SUVs, the Kamiq is built on the VW Group’s MQB platform. It will also compete against newer models in the sector such as the Hyundai Kona, Kia Stonic and Citroen C3 Aircross, as well as the successor to the Renault Captur, the segment’s best-selling model. Last year, sales of small SUVs grew 37 percent in Europe to 1.83 million, almost equaling that of compact SUVs at 1.88 million.

The Kamiq measures 4241mm in length, which is slightly longer than the Seat Arona at 4138mm and the Captur at 4165mm but shorter than the Dacia Duster at 4341mm. The Duster was the segment’s second best-selling model last year.

The Kamiq draws on the VW Group’s safety and infotainment equipment to give it the equipment choices usually seen in more expensive models. Standard semi-autonomous technology available on the car includes emergency automatic braking at city speeds and camera-operated lane-assist. Optional technologies are adaptive cruise-control, side-assist, which warns of overtaking cars from behind, and assisted parking.

The infotainment screen rises slightly above the dash to give a floating effect and goes up to 9.2 inches in size. A so-called Virtual Cockpit, technology first seen on Audis, is an optional screen that replaces the dials in front of the driver.

The infotainment system can be updated over-the-air, meaning that the driver can install new versions of elements such as the mapping. The Shop function within the Kamiq’s infotainment system uses the car’s permanent internet connection to allow the driver to install new apps or buy new data plans. The internet function also creates the ability to remotely connect to the car via a mobile phone app. The app can log driver data and shows how much fuel is left.

The car is available from launch with four engines. The entry engine is the 1.0-liter three-cylinder turbocharged gasoline unit with two choices of power outputs, while the flagship gasoline powertrain is a 1.5-liter turbocharged four-cylinder unit with cylinder shut-off for more economical running at constant speeds. A 1.6-liter diesel is also available.

The design of the car updates the family Skoda front end with its upright grille and hood creases by adding split headlights that places LED driving lights above the main beams. The car is also available with so-called dynamic front and rear indicators, which flash in the direction of travel.

The Kamiq shares its name with a China-only small SUV, which is  already in production based on the cheaper PQ platform. 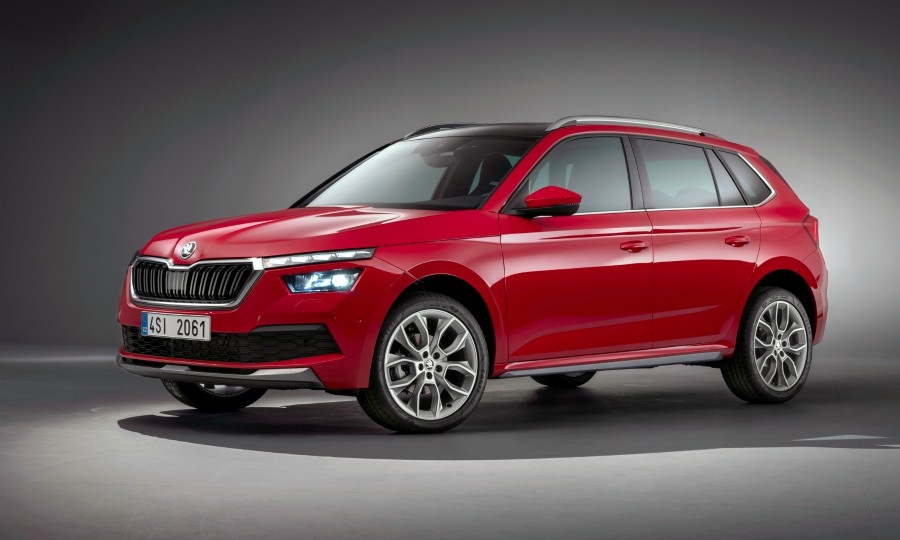 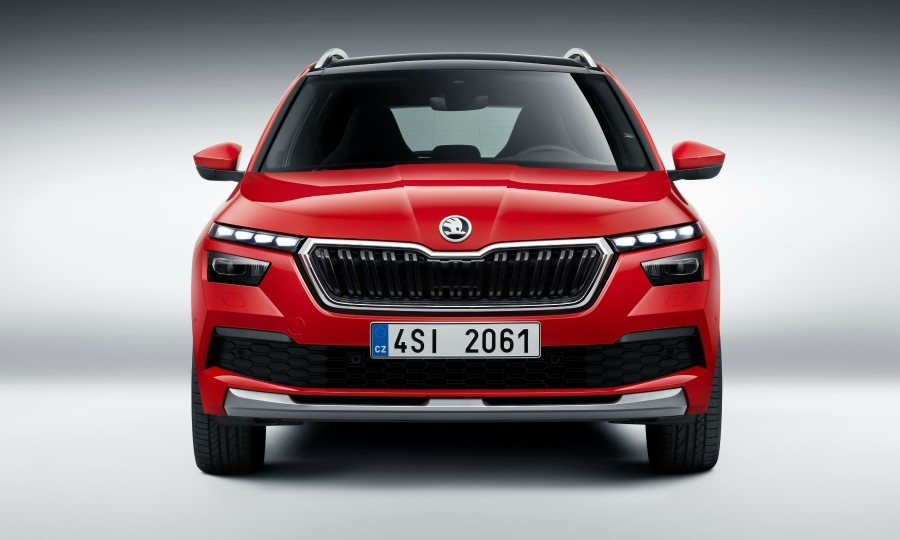 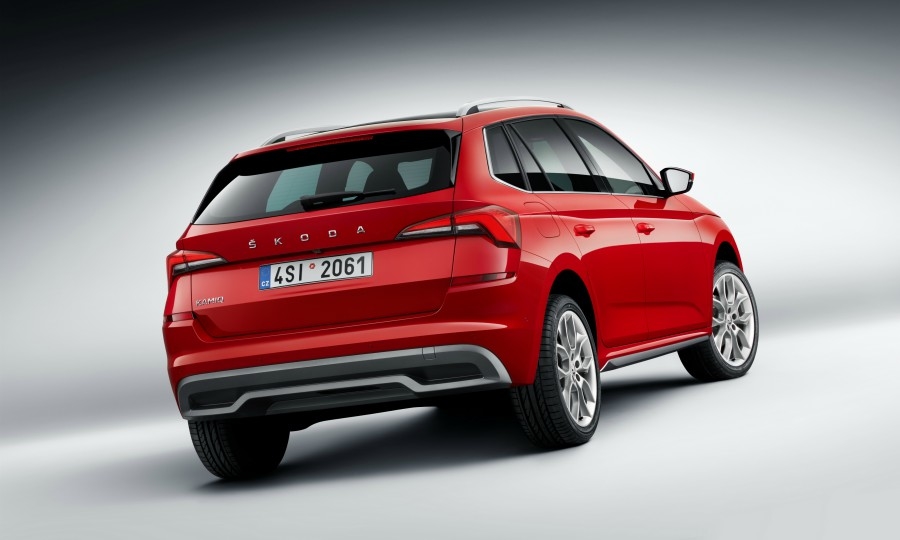 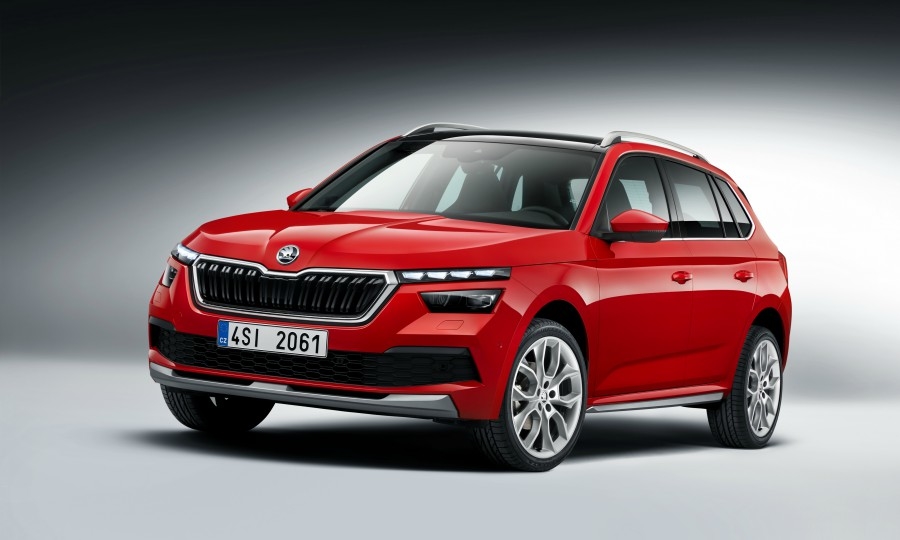 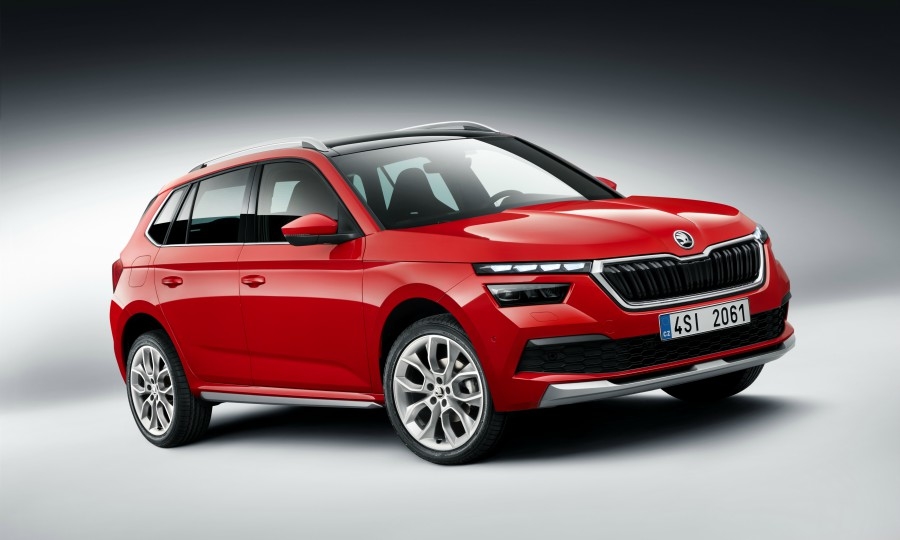 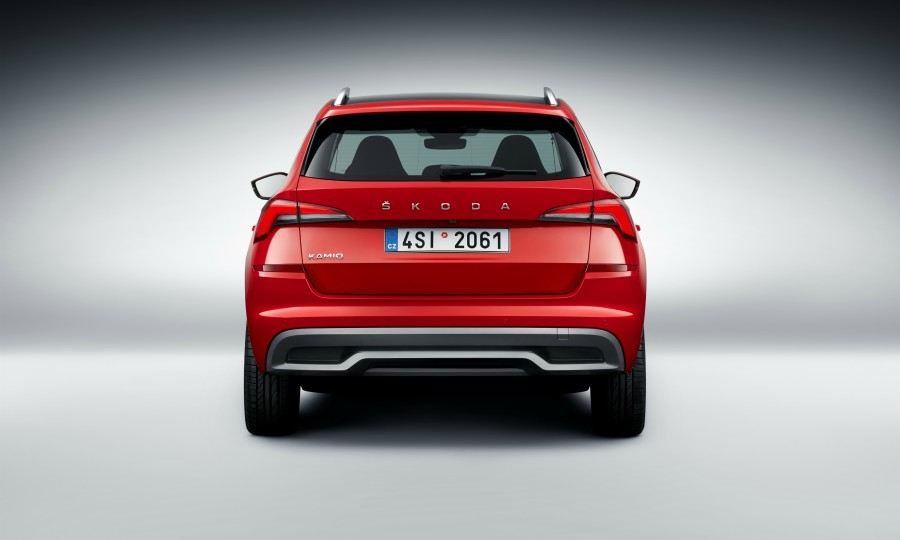 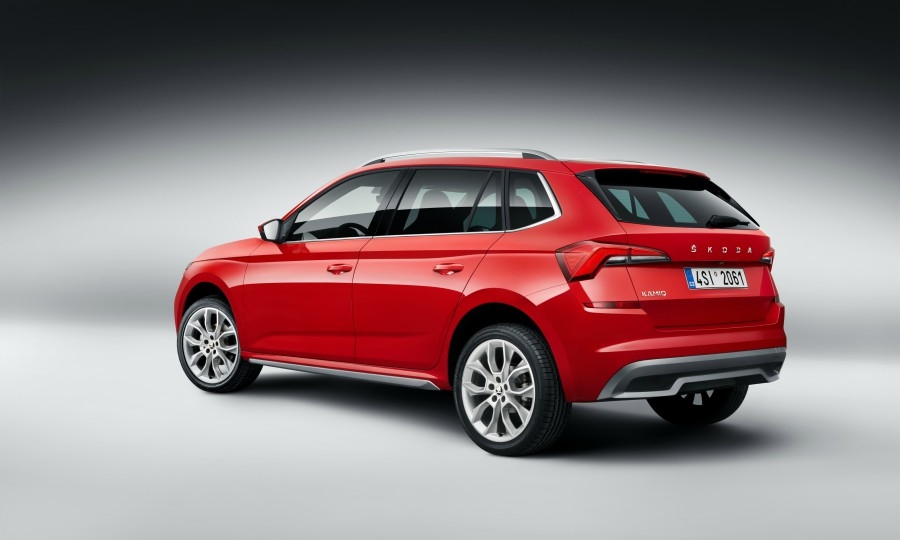 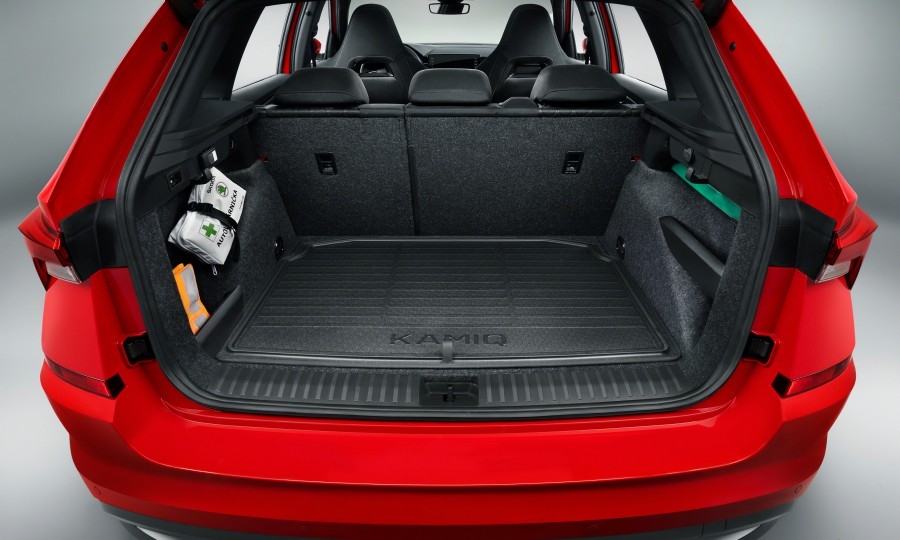 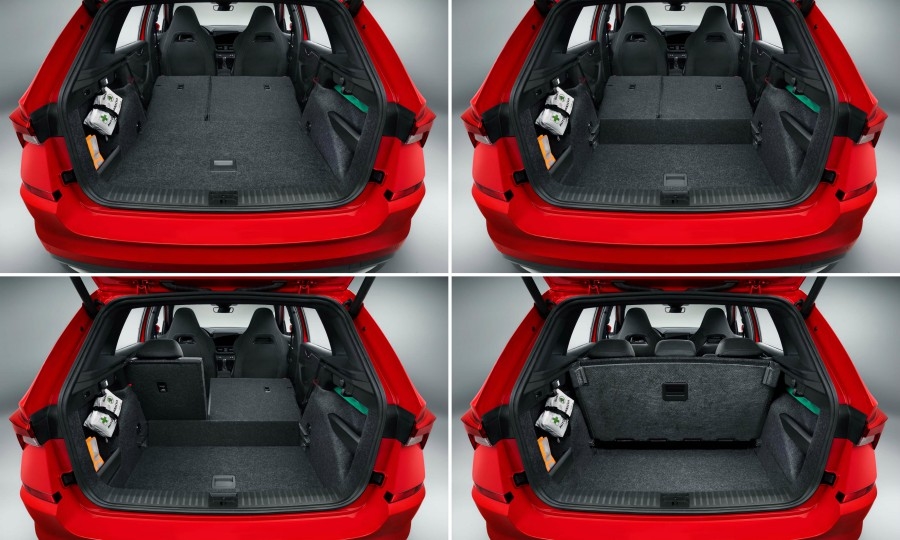 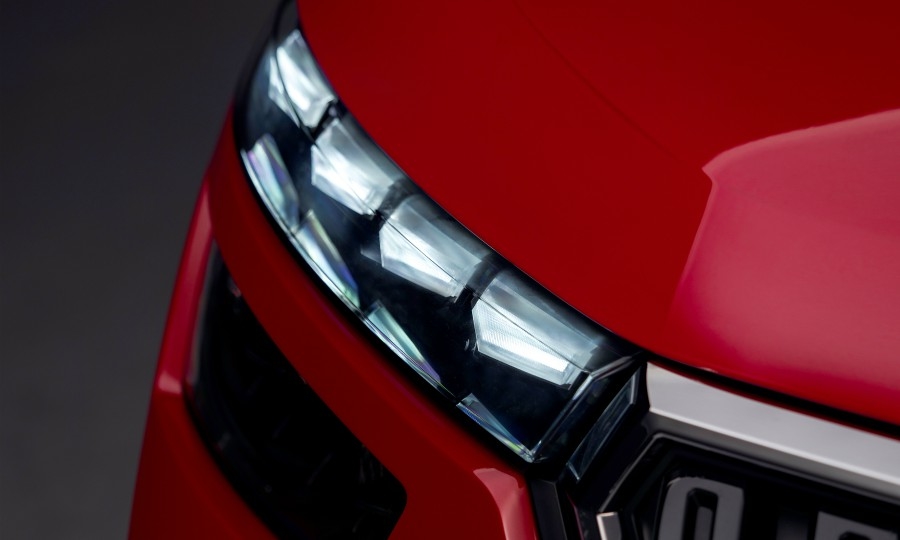 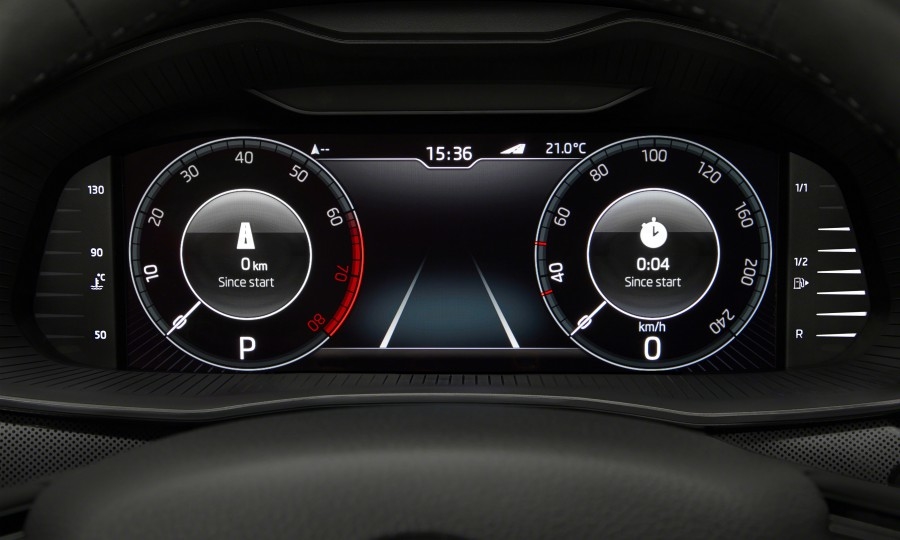 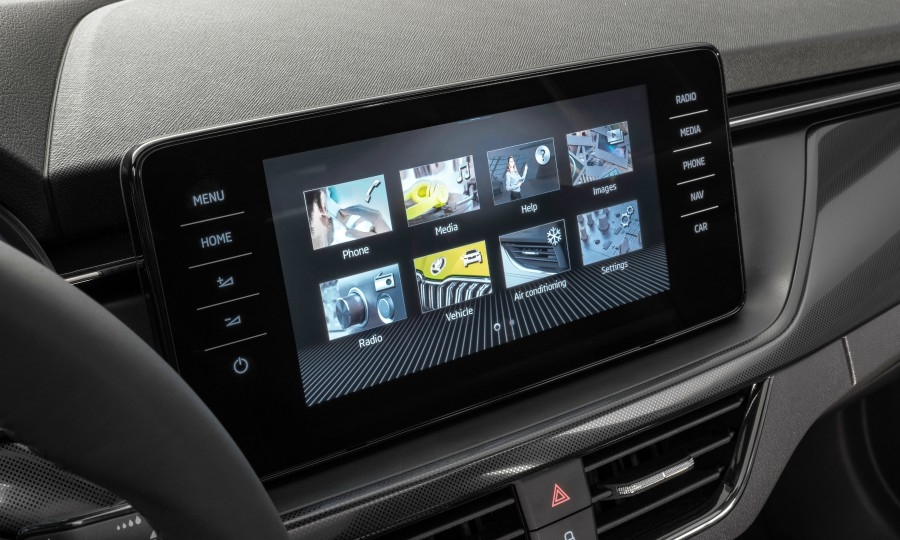 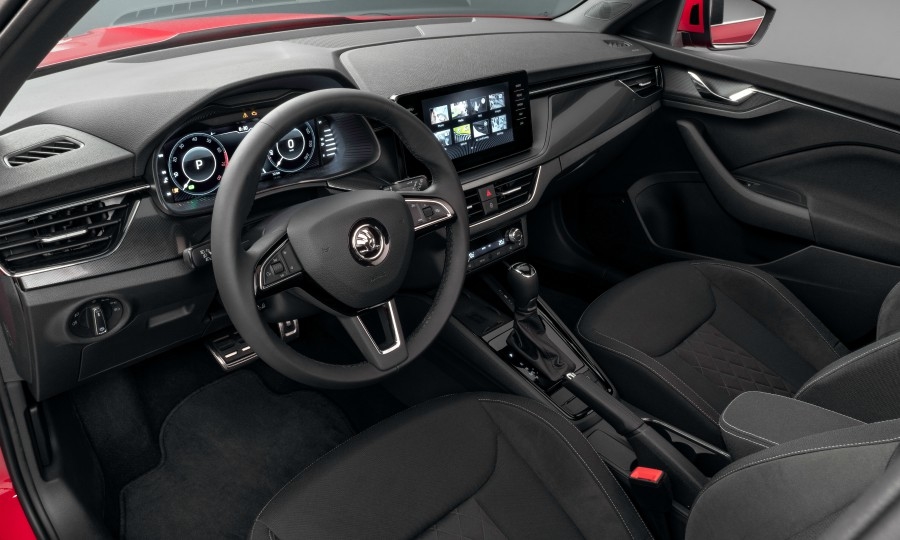 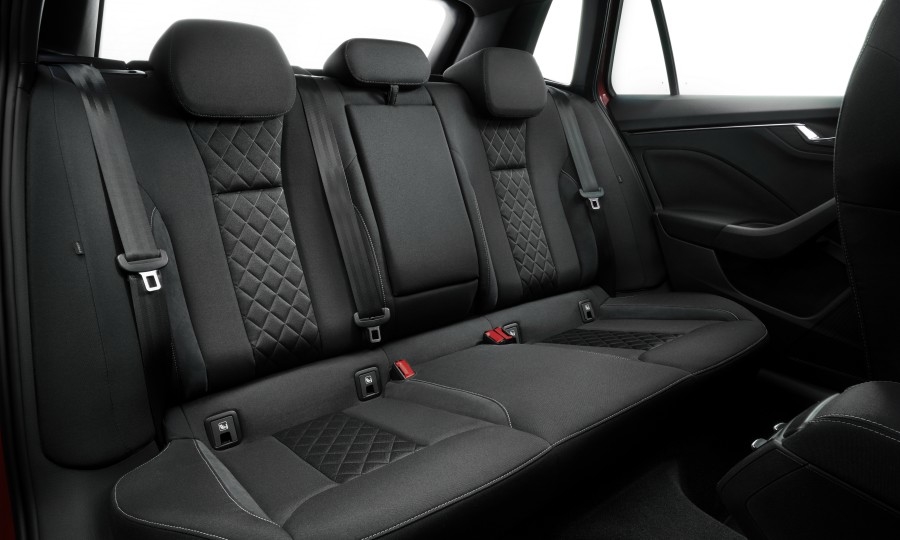